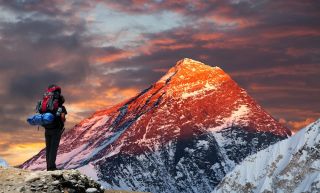 The highest mountains can drive those climbing them temporarily mad.

Now, researchers say, these psychotic episodes constitute a person's own medical condition and may be distinct from altitude sickness.

"Mountains are maddeningly beautiful, but we did not expect that they can drive us to madness," said study co-author Dr. Hermann Brugger, head of the Institute of Mountain Emergency Medicine at Eurac Research in Bolzano, Italy, told Live Science. The researchers detailed their findingsonline Dec. 5 in the journal Psychological Medicine.

Future research on this disorder could shed lights on other episodes of temporary psychosis, researchers say.

At extreme altitudes, mountaineers often mention experiencing psychosis — that is, a mental disorder where a person becomes out of touch with reality. Symptoms of psychotic episodesinclude hallucinations and delusions.

For instance, when mountaineer and anesthetist Dr. Jeremy Windsor was climbing Mount Everestin 2008, he underwent a strange experience common in extreme mountaineering. Alone in the Himalayas at an altitude of more than 5.1 miles (8.2 kilometers), Windsor hallucinated a man called Jimmy, who accompanied him all day long, spoke encouraging words to him and then vanished without a trace.

Until now, doctors have generally thought such psychotic episodes were symptoms of altitude sickness, alongside severe headaches, dizziness and impaired balance. Altitude sickness results from the shortage of oxygen experienced at high altitudes, and can trigger a potentially lethal buildup of fluid in the lungs or brain.

But in the new analysis, Windsor and his colleagues found that "isolated high-altitude psychosis" may be its own medical condition, one distinct from altitude sickness.

To arrive at that conclusion, the researchersanalyzed data from 83 psychotic episodes at high altitudes collected from German mountain literature. They found a list of psychotic symptoms, such as hearing voices, that were linked to altitude but very clearly not always connected to any physical symptoms of altitude sickness or past mental illness.

"Those persons who suffer from these episodes at high altitude are otherwise completely healthy — they are not prone to psychosis," Brugger said.

Isolated high-altitude psychosis was most likely to occur at heights exceeding 22,965 feet (7,000 meters) above sea-level, the researchers found. They remain unsure of what may cause it — perhaps causes similar to ones behind altitude sickness, such as oxygen deficiency or early stages of swelling in certain areas of the brain.

It's also possible the cause isn't due to the altitude at all.

"It is also known that complete deprivation of social contact and loneliness for a long time can provoke hallucinations," Brugger said.

The symptoms of this syndrome apparently disappeared completely as soon as mountaineers left the danger zone, the researchers wrote in the study. "They completely recovered," Brugger said.

Still, this syndrome was clearly linked to a significant risk of accidents, "and even a little mistake can be fatal at extreme altitudes," Brugger said. "It is important that climbers are aware of this risk, that they know these hallucinations are not real, that these effects are reversible, and to find some coping measures during their climbs."

Scientists could seek to simulate these cases of temporary psychosis by placing volunteers in chambers that simulate extreme altitudes using low oxygen and low air pressure.

"This could help shed light on temporary psychosis in general," Brugger said.

In March, the researchers plan to collaborate with Nepalese doctors at Mount Everest's base camp to find out how often isolated high-altitude psychosis might occur.

"They will use questionnaires to collect data from climbers who come down from Everest," Brugger said.