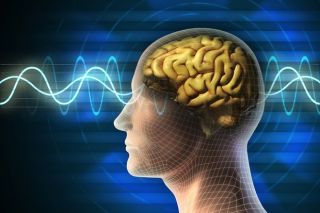 For people with schizophrenia, "hearing voices" is a common symptom that can be disturbing. But a new study from France suggests that stimulating a precise spot in such patients' brains may ease these auditory hallucinations.

The study involved 59 patients with schizophrenia who said they heard voices that other people could not perceive. The people in the study answered questions about the nature of these voices, including whether the voices were friendly or threatening, happened frequently or only occasionally, or were "internal" (perceived as coming from inside a patient's head) or "external" (perceived as coming from outside a patient's head). Based on the participants' answers, the individuals were given an "auditory hallucinations" score, with higher scores indicating more-severe hallucinations.

The researchers then used a therapy called high-frequency transcranial magnetic stimulation (TMS), which sends magnetic pulses through a person's scalp to stimulate brain cells. The scientists targeted a specific part of the brain that is linked with people's understanding and production of language, within an area known as the temporal lobe. [10 Things You Didn't Know About the Brain]

Patients were randomly assigned to receive either TMS or a "sham" treatment that was not expected to have an effect. Each group underwent two sessions of their treatment a day, for two days.

"'Hearing voices' can be a disturbing symptom of schizophrenia, both for patients and for those close to sufferers," said study author Sonia Dollfus, a professor of psychiatry at the University of Caen in France, said in a statement. "We have shown that treatment with high-frequency TMS makes a difference to at least some sufferers," Dollfus said. However, she noted that more research is needed to determine whether TMS is the best way to treat these patients in the long term.

The study was presented Sept. 5 at the European College of Neuropsychopharmacology (ECNP).

Previous studies have suggested that TMS could treat auditory hallucinations in people with schizophrenia, but those studies were less rigorous than the current one. The new study is "the first controlled trial to show an improvement in these patients by targeting a specific area of the brain and using high-frequency TMS," Dollfus said. (A controlled trial is one that includes a "control group," i.e., a group that did not get the TMS treatment.)

Andreas Meyer-Lindenberg, director of the Central Institute of Mental Health in Mannheim, Germany, who was not involved in the study, said that the research builds on previous work suggesting that this brain region plays a critical role in the generation of voice hallucinations in schizophrenia. Although the percentage of people whose symptoms improved from the therapy was moderate, "TMS is a welcome addition to the therapeutic repertoire [for schizophrenia patients], especially for patients who do not respond to medication," Meyer-Lindenberg said in a statement. (Meyer-Lindenberg is a member of the ECNP executive board.)

The study has been accepted for publication in the peer-reviewed journal Schizophrenia Bulletin.