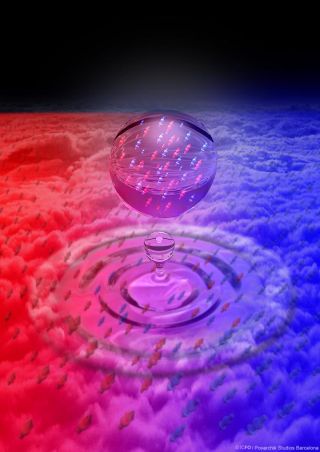 A team of physicists in Barcelona has created liquid droplets 100 million times thinner than water that hold themselves together using strange quantum laws.

In a paper published Dec. 14 in the journal Science, researchers revealed that these bizarre droplets emerged in the strange, microscopic world of a laser lattice — an optical structure used to manipulate quantum objects — in a lab at the Spanish Institut de Ciències Fotòniques, or Institute of Photonic Sciences (ICFO). And they were true liquids: substances that maintain their volume regardless of external temperature and form droplets in small quantities. That's as opposed to gases, which spread to fill their containers. But they were far less dense than any liquid that exists under normal circumstances, and maintained their liquid state through a process known as quantum fluctuation.

The researchers cooled a gas of potassium atoms cooled to minus 459.67 degrees Fahrenheit (minus 273.15 degrees Celsius), close to absolute zero. At that temperature, the atoms formed a Bose-Einstein condensate. That's a state of matter where cold atoms clump together and start to physically overlap. These condensates are interesting because their interactions are dominated by quantum laws, rather than the classical interactions which can explain the behavior of most large bulks of matter.

When researchers pushed two of these condensates together, they formed droplets, binding together to fill a defined volume. But unlike most liquids, which hold their droplet shapes together through the electromagnetic interactions between molecules, these droplets held their shapes through a process known as "quantum fluctuation." [Wacky Physics: The Coolest Little Particles in Nature]

Quantum fluctuation emerges from Heisenberg's uncertainty principle, which states that particles are basically probabilistic — they don't hold one energy level or place in space, but rather are smeared across several possible energy levels and locations. Those "smeared" particles act a bit like they are jumping around across their possible locations and energies, applying a pressure on their neighbors. Add up all the pressures of all the particles fluxing, and you'll find that they tend to attract one another more than they repel each other. That attraction binds them together into droplets.

These new droplets are unique in that quantum fluctuation is the dominant effect holding them in their liquid state. Other "quantum fluids" like liquid helium demonstrate that effect, but also involve much more powerful forces that bind them much more tightly together.

Potassium condensate droplets, however, aren't dominated by those other forces and have very weakly-interacting particles, and therefore spread themselves across much wider spaces — even as they hold their droplet shapes. Compared to similar helium droplets, the authors write, this liquid is two orders of magnitude larger and eight orders of magnitude more dilute. That's a big deal for experimenters, the researchers write; potassium droplets might turn out to much better model quantum liquids for future experiments than helium.

The quantum droplets do have their limits though. If they have too few atoms involved, they collapse, evaporating into the surrounding space.