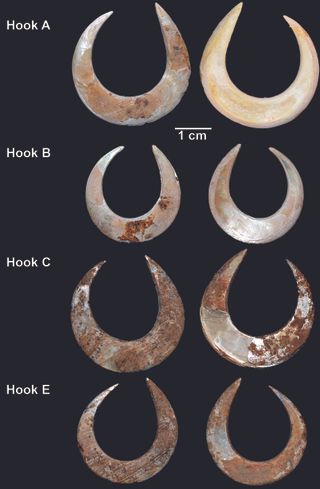 The four circular, rotating fishhooks (A, B, C and E) found within the burial.
(Image: © Photograph by Sofía Samper Carro; as featured in Antiquity)

Deep in a cave on the Indonesian island of Alor lies the roughly 11,500-year-old remains of a high-status woman buried with fishhooks crafted out of seashells. The finds represent the oldest known fishhooks used in a human burial, a new study reports.

During a recent excavation, archaeologists unearthed four complete fishhooks, a broken fishhook and a pierced seashell under the woman's chin and around her jaws.

This discovery overturns the hypothesis that most fishing activities on these islands were carried out solely by men thousands of years ago, said study lead researcher Sue O'Connor, a professor in the School of Culture, History and Language at Australian National University in Canberra. [See images of the ancient fishhooks from Indonesia]

"These are the oldest known fishhooks associated with mortuary practices from anywhere in the world," O'Connor said in a statement. The discovery may "indicate that fishing equipment was viewed as essential for transition to the afterlife in this area."

O'Connor and her colleagues found the ancient fishhooks after asking villagers on Alor whether they knew of any caves within walking distance. Some of the villagers told them about Tron Bon Lei, a cave with an earthen floor that is located high up and far from the water, indicating that the surrounding sea hadn't washed away any artifacts within it.

However, the archaeologists only had time to excavate a 11-square-feet (1 square meter) pit, meaning they found only the skull, shell and fishhooks, including one J-shaped hook and four circular rotating hooks made out of a species of sea snail, O'Connor said.

"We did not have time to open a bigger area in that field season, but decided we should excavate the skull and fish hooks because there was a risk that some villagers, who believed we were digging for gold or that there must be gold or gems in the site, might come and dig it up after we left," O'Connor told Live Science.

It's fairly common for villagers to think archaeologists are prospecting for more conventional treasures, rather than old bones and stone artifacts, she noted.

"We believe this early burial shows that this woman was of high status, as burials with grave goods as exceedingly rare in Southeast Asia," O'Connor said.

Until this discovery, the oldest funerary fishhooks were a collection of 9,000-year-old hooks found in Siberia's Ershi cemetery. There are also 6,000-year-old rotating fishhooks made of pearl shell (Pinctada radiate) in Oman. Given that Alor is a remote island and that its rotating fishhooks were produced much earlier than the ones in Oman, it's likely that the different cultures developed this "rotating technology" separately, instead of picking it up from each other, she said.

"We argue that the same sort of artifact was developed independently because it was the most fitting form to suit the ecology, rather than through cultural diffusion," O'Connor said in the statement.

The study was published online Dec. 6 in the journal Antiquity.