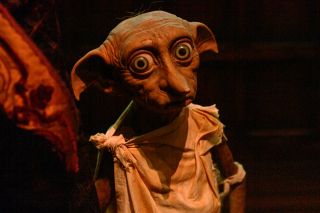 Dobby the house-elf tidied up while muggles slept.
(Image: © Shutterstock)

Ken A. Paller is a professor of psychology and director of the Cognitive Neuroscience Program at Northwestern University in Evanston, Illinois. Paller has contributed this article to Live Science's Expert Voices: Op-Ed & Insights.

Sleep will consume one-third of your life. You can't avoid it, nor should you. Sound slumber is energizing and uplifting. But there's more to it. Sleep is also essential for effective learning.

The essence of who you are — your memories and habits — may all depend on what your brain does while you sleep. Electrical recordings show that the brain is far from idle when you snooze. Neuroscientists have conjured up many ideas to try to explain this mysterious neural activity.

Here's one such idea: Picture a house-elf from Harry Potter's world spending the whole night busily organizing and rearranging memories so they’ll be in good working order the next morning. [5 Surprising Sleep Discoveries]

Yes, that’s implausible, but consider that during a typical day, countless memories are stored in your brain. After a few days, most are forgotten, as if they somehow disappeared (one might say, “disapparated”).

Your best bet to counteract some of this massive memory loss is to practice what you've learned, the same way actors rehearse lines of a play. Neuroscience research is helping us understand how new information can be gradually integrated into your brain's memory networks this way. When you want to memorize something, you should bring it to mind and rehearse it. Repeatedly. The effort you expend working to remember something pays off because corresponding brain networks change, enhancing long-term storage.

But that's not the only way to strengthen memory storage.

As I described in a new paper in the journal Current Directions in Psychological Science, recent investigations from many labs around the world show that this "rehearsal" also happens while we sleep — a time when we seemingly lack both the intention to rehearse and any awareness of doing so.

Listen for the tone

A key methodological breakthrough fueling these new insights makes use of odors or sounds. For example, if a special tone is played while learning a particular fact, the tone and the fact can be linked. Later, during sleep, that same tone can provoke the neural plasticity (changes in connections between neurons) central to storing that information within the brain’s circuitry.

Although the orthodox view used to be that hearing is mostly inoperative during sleep, in 2009 my students and I discovered that subtle sounds played during deep sleep promoted rehearsal without awakening our volunteers. The sounds worked as "memory reminders" because they could readily reactivate recently acquired information in the brain.

In these experiments, now repeated many times, we ask people to learn locations of various objects while listening to specific sounds, and then they take a nap in the lab. After they wake up, they recall locations more accurately for objects linked with sounds that we surreptitiously played during sleep. In this way, sound presentations during sleep have allowed neuroscientists to hack into recent memories.

These findings raise the possibility that people could select specific memories to reactivate while they sleep in their own homes. Why do this? Ordinarily, natural reactivation of memories in sleep may not be optimal, and we unknowingly rehearse things we'd prefer to forget. For example, is your sleep filled with annoying advertising you encountered during the day? Perhaps you could shift the bias to emphasize what you really want to remember instead. [10 Ways to Keep Your Mind Sharp]

The possibilities for selecting memories to consolidate during sleep are vast, including the strengthening of specific skills. Researchers in 2015 conducted a study showing they could boost learning of Dutch vocabulary using verbal cues during sleep. Similarly, work from my lab provided evidence that sleep cues could improve learning with respect to the abstraction of grammatical rules, an important part of becoming fluent in a new language. We also strengthened musical skills during sleep in a study in which volunteers first learned to perform two melodies, and then woke up better at the one melody that had been quietly presented to them while they slept.

Some skills and habits are acquired or expressed without us knowing it. One such bad habit is teeth grinding during sleep. Reactivating memories during sleep could perhaps help people to unlearn such habits. The idea would be to first train people to release jaw tension when hearing a special sound during the day. That same sound would then cue them to relax the jaw during sleep. We think that novel experimental therapies like this hold promise, given our results with habit learning of a different sort; we were able to reduce implicit social bias using sounds initially associated with anti-bias training and subsequently played during sleep.

Valuable benefits might arise even when strategic reactivation of memories during sleep produces only small changes. Consider recovery after a stroke. Rehab sessions aim to revitalize brain networks essential for movement or language. Recovery depends on how well learning progresses. With only a few hours of therapy a week, it can take a while for this learning to take hold. Sleep-assisted therapy, using specific sounds associated with desired actions and also played nightly, might quicken recovery.

New means for tinkering with memory storage demand a deep dive into ethics. Aldous Huxley imagined how bad things could go in his "Brave New World": The state controlled citizens through "hypnopaedia," or sleep teaching. People assumed their assigned roles in society, high or low, because they were bred that way, compelled to be avid consumers, with little choice in the matter. While we should proceed cautiously with new technology, current methods require first training people when they are awake, such that what they are learning isn't hidden and they have the option to reject it.

Neuroscience has opened the door to new possibilities for guiding the sleeping brain to work better. In a sense, elves really do clean your brain while you sleep. With further scientific efforts in these various new directions, a refined understanding of the sleeping brain could bring wide-ranging benefits, and give us more reasons to treasure — rather than resent — our need for sleep.