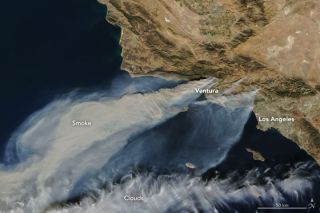 Multiple wildfires have scorched more than 110,000 acres (44,500 hectares) in California's Los Angeles, San Bernardino and Ventura counties. And the blazes will continue to spread at least through Saturday (Dec. 9), fanned by seasonal winds blowing at up to 80 mph (129 km/h), the National Weather Service announced this morning (Dec. 7).

Sustained winds blowing from the east and northeast will increase to more than 30 mph (48 km/h), with gusts potentially reaching between 60 and 80 mph (97 and 129 km/h) in higher elevations, the alert said. These fierce winds, coupled with increasingly dry surface conditions, mean that the rapid growth of the fires is likely to continue over the next two days as efforts to combat the blazes are forced to a standstill.

"When strong winds are present, the ability to use fixed-wing aircraft and helicopters is greatly diminished," Patrick Marsh, a warning-coordination meteorologist for the National Weather Service, told Live Science. "It also means that fires will tend to move very quickly. When a fire is moving quickly, there is very little that can be done to try and extinguish it. Instead, the focus is on protecting life and property." [Raging Southern California Wildfires Seen from Space (Photos)]

Nearly 200,000 people have already been evacuated from the threatened counties since the first fires ignited on Monday evening, and more will follow, The New York Times reported. An emergency alert dispatched by the City of Los Angeles Emergency Management Department late Wednesday night has designated all of Los Angeles County as being in "extreme fire danger." Hundreds of schools have canceled classes and several major highways have closed due to smoke and fire risks. (Evacuation information is available at the Cal Fire home page.)

The strong seasonal winds occurring now, known as the Santa Ana winds in Southern California and diablo winds in Northern California, increase the risk of wildfires every year. But this week's powerful gusts mark some of the strongest in the last decade, CNN reported.

The Santa Ana winds are katabatic winds, which occur when high-pressure winds flow downslope. The wind compresses as it descends, becoming warmer, drier and faster. At a time of year when natural fuels like grass, brush and tree roots are already dry and abundant in California, strong winds can make bad fires much worse, and easily start new ones by throwing embers hundreds of feet forward, Live Science previously reported.

Until these winds weaken, the fires will continue, Marsh said.

"Once the winds weaken to an acceptable level, aircraft will resume flight and can be used to stop the advance of the fire," Marsh said. "Additionally, even after a fire moves though an area, embers will remain. Firefighters will work in these charred areas to overturn soil and extinguish remaining hotspots to prevent rekindling of the fire in these areas."

These fires are only the latest in what has been labeled one of California's worst wildfire seasons on record. Blazes in Northern California in October killed at least 43 people and likely caused billions of dollars in damage, according to the reinsurance firm Aon Benfield.