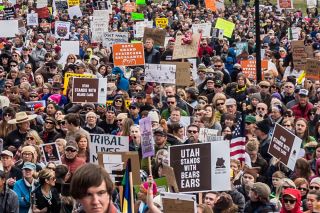 The two proclamations constitute the largest rollback of federally protected land in U.S. history, according to USA Today, and will allow miners and ranchers access to the previously protected land.

In a speech today, Trump said that previous administrations had violated the spirit of the American Antiquities Act on 1906, which mandates that monuments be made with "the smallest area compatible with proper care and management of the objects to be protected." [5 Fossil Hotspots: National Parks to Visit]

The new proclamations are the result of an executive order Trump signed in April that authorized a review of national monuments designated since Jan. 1, 1996, that were either more than 100,000 acres (40,400 hectares) in area, or that were "made without adequate public outreach and coordination with relevant stakeholders," Interior Secretary Ryan Zinke said, in a previous report by Live Science.

However, reducing the size of these monuments could imperil countless scientific sites and fossils, including those of dinosaurs, crocodilians, turtles, lizards and mammals, P. David Polly, president of the Society of Vertebrate Paleontology and a professor of sedimentary geology at Indiana University, wrote in an op-ed for Live Science last week.

"These two monuments were set aside specifically under the American Antiquities Act to protect their paleontological and archaeological resources from damage by mining and other mineral extraction," Polly wrote. "Both monuments protect exquisite fossil sequences that tell us about crucial intervals in the history of our planet."

Almost 40 previously unknown animal species have been discovered at Grand Staircase-Escalante, which was established as a national monument in 1996 by then-President Bill Clinton. This includes 13 newfound dinosaur species, such as Diabloceratops eatoni, a distant relative of Triceratops, and Teratophoneus, a meat-eating tyrannosaur related to Tyrannosaurus rex, Polly said.

Researchers also found a small creature known as Paranyctoides, which was the oldest animal with a placenta (an animal that gives birth to live young) on record at the time, he noted.

Shrinking these monuments is "a loss to science and the American public," Polly said. "The paleontological science at Grand Staircase-Escalante and Bears Ears was one of the primary justifications for turning these wilderness lands into national monuments so that coal mining, petroleum extraction and other damaging activities would not ruin the scientific value they provide to us all."

The monuments "also provide homes for hundreds of species of birds and other wildlife, David Yarnold, president and CEO of the National Audubon Society, said in a statement.

Moreover, "more than 100,000 archaeological sites within the Bears Ears National Monument require conservation, including rock art dating back at least 5,000 years as well as cliff dwellings and other remnants of past cultures that have existed in the region for millennia," the Pew Charitable Trusts, a nonprofit, nongovernmental organization headquartered in Philadelphia, said in a statement.

Thousands of people protested the new proclamations at the Utah State capital today. Several tribes, including the Navajo Nation, and conservation and outdoor industry groups say they will challenge Trump's decision in court, according to The New York Times.