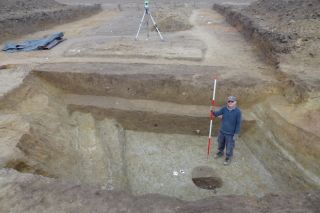 The site of a Roman fort built when Julius Caesar first invaded Britain has been unearthed in Britain.
(Image: © University of Leicester)

An ancient fort near a beach in southeast England is the first solid archaeological evidence of Julius Caesar's invasions of Britain in 54 and 55 B.C., according to researchers.

Caesar himself wrote about his invasions of Britain, which have long been regarded as the first historical events ever recorded in the British Isles.

But there was no direct archaeological evidence of Caesar's invasions until archaeologists discovered an ancient defensive ditch in 2010 while carrying out excavations ahead of a road construction project through the village of Ebbsfleet beside Pegwell Bay. Ebbsfleet sits on the Isle of Thanet in Kent, which overlooks the English Channel. The researchers suspected the ditch was associated with Caesar's invasions, but couldn't be sure.

Recent excavations at the site have now established that the ditch was part of a Roman military fort built at Ebbsfleet in the first century B.C., when the Isle of Thanet was separated from the Kentish mainland by a marshy arm of water later known as the Wantsum Channel, said University of Leicester archaeologist Andrew Fitzpatrick, who led the excavations at the site. [Photos: The Site of Julius Caesar's British Invasion Revealed]

Although the Wantsum Channel was reclaimed and silted up in the Middle Ages, and the archaeological site now lies about 1 kilometer (less than a mile) from the coast, after the invasion in 54 B.C. the Romans had built the fort on the eastern shore of the channel, on a south-facing peninsula on the Isle of Thanet, Fitzpatrick told Live Science.

The fort at Ebbsfleet was likely occupied by a garrison of Roman soldiers who kept watch over the more than 800 ships of the invasion fleet anchored in Pegwell Bay, while Julius Caesar led his invading legions across Kent and north of the River Thames, Fitzpatrick said.

"The purpose of the [garrison] is to watch over the fleet, so that the Roman army can go home at the end of the campaign," Fitzpatrick said.

Now, for the first time, researchers have shown that Ebbsfleet was the site of Caesar's invasion in 54 B.C., Fitzpatrick said.

Excavations by University of Leicester archaeologists in 2016 and 2017 showed that the fort was built in a similar style as forts built by Caesar's legions in what are now France and Germany within a few years of the British invasion, he said.

The archaeologists also discovered the remains of humans who appear to have been killed in a conflict, judging by the sharp cut marks on their bones as well as several non-British iron weapons found nearby, Fitzpatrick said.

The weapons included the head of an iron spear identified as a Roman pilum — a javelin or throwing spear — of a distinctive style found in the parts of southern Gaul where Caesar was known to have recruited soldiers for his legions, Fitzpatrick said.

What's more, some of the landscape features of Pegwell Bay matched Caesar's description of his landing site in 54 B.C., including the long, sandy beach where his troops could quickly disembark from their ships, and the cliffs to the north of the bay that could be seen by soldiers on the Roman ships in the channel, Fitzpatrick said.

The cliffs were backed by high ground that served as a refuge for the warriors of the defending British tribes, he said.

"The British gather to oppose the [Roman] landing in 54 B.C., but they see 800 ships — and so they take fright and conceal themselves on the higher ground," Fitzpatrick said. "So those statements, which are just incidental to the narrative [Caesar] is giving, give us the clues about what the place looked like — and all those clues are consistent with the landscape around Ebbsfleet."

Caesar also led a smaller invasion of Britain a year earlier, in 55 B.C., when he landed two legions of soldiers at an unknown location on the Kent coast, probably around 6 miles (10 kilometers) south of Pegwell Bay.

That invasion lasted just 10 weeks and subdued only the eastern part of Kent, he said.

But Caesar's invasion in 54 B.C. with five infantry legions and 2,000 cavalrymen — more than 20,000 soldiers in total — was instrumental in establishing Roman supremacy over southeast Britain, Fitzpatrick said.

Although Caesar left no occupying armies behind in Britain after the invasions, the fact that he had conquered the British tribes and forced peace treaties on them was celebrated in Rome as a breakthrough victory, Fitzpatrick said.

The achievement was seen in a similar way as the discovery of the "New World" was seen by modern Europeans in the 15th century.

"It's something that's amazing for the Romans — Julius Caesar has gone beyond the known world, and conquered it," Fitzpatrick said. "That causes a sensation in Rome."

While some early British historians portrayed Caesar's invasions as partial failures preceding the permanent Roman occupation of Britain under Emperor Claudius starting in A.D. 43, Fitzpatrick said he thinks that's "a misreading of history."

Instead, modern archaeological and historical research suggests that the treaties Caesar imposed on the southeastern tribes created British client kingdoms that depended on their associations with Rome for authority and legitimacy, he said.

Those treaties paved the way for the later occupation, which quickly established Roman rule in southeast Britain, though it would take many more years to conquer the more distant parts of the country by military force, Fitzpatrick said.

"We think that's because of the links that have been established [by Caesar] almost 100 years earlier that bind the elite of the southeast of [Britain] into the Roman world," Fitzpatrick said. "The deals that Caesar made helped set the course for the gradual Romanization of Britain and the Roman conquest."