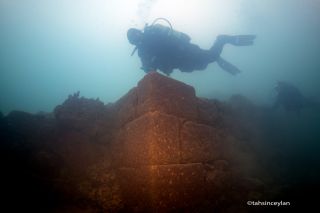 The castle found beneath the surface of Lake Van in Turkey may have been built 3,000 years ago by ancient people called the Urartians, but archaeologists can't say for certain.
(Image: © Photo by Tahsin Ceylan)

Last week, a story about a 3,000-year-old castle discovered beneath the waters of Lake Van, in Turkey, went viral. But what's the real story behind this Atlantis-like discovery?

It turns out that the story is more complicated and mysterious than recent news reports suggest, Live Science found after speaking with several archaeologists as well as the leader of the photography team who discovered the castle.

Parts of the "castle," a term that the discoverers use to describe it, likely date to the Middle Ages, which lasted from about A.D. 476 to 1450, and it may not be an entirely new discovery: Reports from surveys of the Lake Van area conducted in the 1950s and 1960s noted the existence of the structure. It's not clear when the castle was washed underwater. [See Photos of the Remains of the Underwater Castle in Turkey]

For instance, some of those reports indicated that medieval castle builders at Lake Van actually reused ancient material dating back to about 1000 B.C. to create the castle walls. The reports also mention a wall that plunges into the lake that has inscriptions on it that discuss an ancient king named "Rusa" and his interactions with a god named "Haldi."

What has really been found?

For the past 10 years, a team led by Tahsin Ceylan, an underwater photographer, has been exploring the waters beneath Lake Van, documenting natural features like microbialites (living, organic rock structures that are similar in some ways to coral) as well as archaeological sites, such as a Russian ship that dates to 1915.

In 2016, this team, which does not include an archaeologist, found a structure outside the harbor of Adilcevaz, a town in Turkey that has been inhabited for thousands of years. We "came across some sort of wall outside the harbor in one of our dives. Later [we] found out that it is a castle's wall that starts within the harbor and continues outside," Ceylan told Live Science. [Image Gallery: Stone Structure Hidden Under Sea of Galilee]

"The castle is approximately 1 kilometer [less than a mile] long and has a solid structure."

The castle is made primarily of cut stones, Ceylan said, adding that the team had found a lion drawing on one of them, supporting the idea that Urartians — a people who flourished in Turkey about 3,000 years ago — may have built the structure. Lions were a popular motif among the people of Urartu.

Media reports suggested that an archaeologist was part of the team. "Our team of divers does not include an archaeologist — that is something the press added on their own," Ceylan said. "In our statement that we've sent to the press, we indicated that [given] the fact it was built with cut stones and one of the stones has a lion figure carved on it, the castle might belong to [the] Urartian civilization that lived here 3,200 years ago. But we specifically stated that archaeologists are the sole deciders on the matter. But the press made their own assumptions from this statement," Ceylan said.

The archaeologists that Live Science talked to thought that many of the remains the team found likely date to the Middle Ages. The underwater remains seem to consist of "Medieval castle walls and probably an Urartian site," said Geoffrey Summers, an archaeological research associate at the University of Chicago's Oriental Institute. The remains have been "known for a long time" from survey reports, Summers said.

Summers looked at a high-resolution image of the lion drawing, saying he thinks it looks more medieval than something from the Urartian kingdom.

Kemalettin Köroğlu, an archaeology professor at Marmara Üniversitesi, agreed that much of the underwater remains are actually medieval. He noted that some of the images show masonry between the ashlar wall stones (which are a type of stone that is square cut). "The walls [seem] medieval or late antique period rather than Urartu. Urartian never used any material between ashlar wall stones to connect each other," Köroğlu said.

It's possible that some of the 3,000-year-old Urartian remains seen in the photos were actually reused by castle builders during the Middle Ages, said Paul Zimansky, a history professor at Stony Brook University in New York. He also said that he needs to conduct more research.

A vast collection of surveys and documents published by archaeologists who surveyed the Lake Van area in the 1950s and 1960s includes mentions of both Urartu and medieval remains in the area.

One intriguing paper, by archaeologists Charles Allen Burney and G.R.J. Lawson, published in 1958 in the journal Anatolian Studies, discusses a "medieval castle at Adilcevaz, on the north shore of Lake Van," whose builders had reused blocks that had been constructed by the Urartians 3,000 years ago.

Another intriguing report published in 1959 in the journal Anatolian Studies by a scholar named P. Hulin reports on a "lofty wall of later than Urartian times" that runs "into the lake." While investigating the wall, Hulin apparently discovered inscriptions dating back about 2,700 years that mention an Urartian king named Rusa. The inscriptions are fragmentary, and Hulin could make out only a small amount of the writing. The inscriptions discuss Rusa, who appears to be interacting with Haldi, an Urartian god.

The archaeologists and divers that Live Science spoke to all agree that more research is needed to determine what exactly these underwater remains consist of. "The area needs to be thoroughly researched by [an] archaeologist," Ceylan said. "For the time being, there is no team here to conduct dives and researches on the castle."