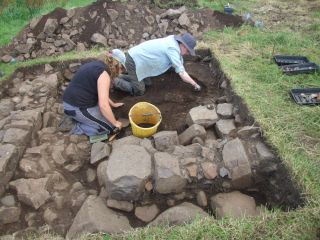 Archaeologists excavated a stone structure near Dunluce Castle along the coast of Northern Ireland. Experts already knew about a town that flourished in the 1600s, but they were unaware of the earlier settlement, which dates back to the late 1400s and early 1500s.
(Image: © Northern Ireland Environment Agency)

The medieval Dunluce Castle, located on the craggy rocks of Northern Ireland's coast, is neighbors with a mysterious stone settlement, according to a recent excavation.

The castle dates back to the 15th century, and once housed the powerful MacQuillan family, which controlled a large amount of territory in Northern Ireland. On a recent dig, the Northern Ireland Environment Agency planned to uncover part of the lost 17th century town of Dunluce near the castle. But instead, archaeologists stumbled upon an earlier settlement that dates back to the 15th and 16th centuries.

"This is a tremendously exciting historical development," Mark Durkan, Northern Ireland's environment minister, said in a statement. "Traces of buildings were unearthed close to the cliffs upon which the castle was built. These buildings most likely formed a small settlement, just outside the original castle gate." [See photos of the excavation near Dunluce Castle]

The settlement's remains include a stone structure with a doorway at its corner, "which is quite different to the 17th century buildings revealed to date," Durkan said. Through radiocarbon dating, the researchers determined that a fireplace inside was used in the late 15th century, about the same time that the MacQuillans lived in Dunluce Castle.

"We are extremely lucky to make this exciting discovery," Durkan said. "Very few 15th-century buildings, other than those built entirely from stone, have survived in Ulster and normally there would be few traces, if any, for archaeologists to investigate."

The archaeologists also found pottery that dates back to the late medieval period, which raises questions about the settlement's relationship to the early inhabitants of Dunluce, experts said.

"Up to now, we knew there was a substantial 17th century settlement in the fields around Dunluce,"Durkan said. "What we are now beginning to uncover are traces of earlier and extensive late medieval settlement activity, which are equally as important as the remains of the 17th century Dunluce Town. This provides an exciting new avenue of research to explore as part of our future investigations at Dunluce."

The government of Northern Ireland plans to continue the excavation of the town at Dunluce and the castle's gardens with money from the Heritage Lottery Fund.