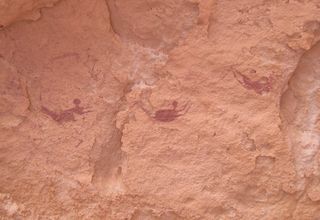 Some of the purported "swimmers" in the Cave of the Swimmers, Egypt.
(Image: © NASA Photo/Chris McKay)

Life imitates art. And sometimes science does the same.

Researchers discovered the mineral remnants of the lake while studying a region well-known for its rock art. The most famous example is the Cave of the Swimmers, which provided a setting in the movie "The English Patient." The drawings in the cave depict humans that appear to be swimming, floating and diving. And yet this area in southwestern Egypt is one of the driest in the world. [Cave Art in Photos]

The generally-accepted explanation is that the climate was much wetter in the past, supporting not only the possibility of a swimming hole, but also abundant animal life, such as cows, giraffes and ostriches, which were also drawn or carved into the region's rocks.

Scientists have previously found support for this local change in climate in ancient lake beds and other geologic data, but most of these lakes pre-date the rock art by many thousands of years. Until now, no one had identified any evidence of a relatively recent, semi-permanent lake that could have served as a swimming hole for the local rock artists.

"Indeed, we found that there were lakes not far from the Cave of the Swimmers," says Chris McKay from the NASA Ames Research Center.

Earlier this year, McKay and his colleagues h Center.he Cave of the Swimmers, a relatively recent, semi-permanent lake that could have served as a swimming hole carbonate deposits lining the walls of two neighboring valleys in the Gebel Uweinat region, which is about 200 kilometers south of the Cave of the Swimmers.

"The deposits look like a 'bathtub ring' around the canyon walls," McKay says.

The ring-shape and mineral content of the deposits imply that they formed in shallow water along a lake shoreline. From carbon dating, McKay and his colleagues estimate that the two inferred lakes existed about 8,100 and 9,400 years ago, respectively.

The age of the lakes seems about right that one could bravely speculate that the prehistoric men or women who decorated the Cave of the Swimmers either knew of the lakes or perhaps even swam in one of them on a wandering voyage.

The research at the prehistoric Journal of African Earth Sciences ouwas partly funded by the NASA Astrobiology Program.

The Cave of the Swimmers has captivated imaginations ever since it was discovered by the Hungarian explorer László Almásy in 1933. The shallow cave's paintings are about 7,000 years old, give or take a thousand years, and show human figures performing what looks like a kind of Neolithic doggy paddle.

Confronted by the seeming inconsistency of swimmers in a desert landscape, Almásy hypothesized that the artists were realistically depicting their surroundings and that the climate had in fact been wetter back then.

It should be noted that researchers now question the original interpretation of "swimming."

"The 'swimmers' move towards 'headless beasts' in a straight line, more as if floating in air than swimming" says Andras Zboray, a Sahara explorer and rock art researcher. "They are clearly symbolic, as are the beasts, with an unknown meaning."

Still, the idea that water was much more abundant in this part of the Sahara several thousand years ago is supported by other prehistoric art in the region. Other caves and rocks show scenes of pastoral animals, which would have been unable to survive in the current dry conditions.

"Both [of the newly-discovered] lakes are located in areas with an exceptionally rich concentration of rock art sites in the immediate vicinity, and I suspect this cannot be a coincidence," Zboray says.

As compelling as this connection between art and past climate may be, McKay did not venture into the Sahara to study ancient human artifacts, nor to look for dried-up lakes. He and co-author Marinova went to the Egyptian desert to study rock-clinging microbes with the purpose of finding out how these organisms can survive under such extreme conditions, and whether they can give us any clues to potential life on Mars.

"Our scientific interest is the dry limit of photosynthesis, so we wanted to go to the driest part of the Sahara," McKay says.

But exploring this harsh environment is logistically challenging. For this reason, McKay and Marinova joined an archaeology group led by Zboray that was going to Gebel Uweinat to study the local rock art. [Photos: Mars Caves and Lava Tubes]

During one of their excursions, McKay noticed mineral deposits that reminded him of other work he has done on lake sediments. The geologic features partially resemble dried-up sponges, and were found in two valleys separated by about 5 kilometers.

McKay and his colleagues took a few samples and measured the mineral composition to be primarily carbonate. The horizontal alignment of the deposits and their unique structure indicates that they formed in long-term standing water. The team concluded that each valley must have supported a relatively stable lake.

"The size of the lakes would probably have been large enough to do laps," McKay says.

Zboray finds fascinating the confirmation of standing bodies of freshwater in Gebel Uweinat roughly 9,000 year ago, but it raises a number of yet unanswered questions.

"The obtained dates are surprisingly old, and appear to considerably pre-date the bulk of the rock art," Zboray says. The caves in the surrounding area have abundant cattle paintings that are dated as 6,500 to 5,500 years old.

"So there is a clear temporal disconnect," he says.

Zboray is also puzzled by the local geography. The lakes could have formed from a natural dam, and they could have been fed by rainfall. However, in this case, the lake levels would have likely gone up and down with strong evaporation and infrequent rainfall.

"One plausible explanation is that the lakes were fed by some artesian source that could keep them at the same level for an extended time period, only limited by the height of the barrier blocking the valley," Zboray says.

He has plans to go back to the area to better map out the extent of the deposits and to look for remnants of the presumed barrier.

The mineral deposits themselves tell a story about life in and around the lake.

The carbonate has a morphologically-distinct structure that typically forms only in water that contains microbes. The organisms alter the pH, affecting how the carbonate precipitates out of solution.

"The carbonate is a macroscopic remnant of microscopic life," McKay explains.

These biologically-triggered formations, or "microbialites," are found around the world at places such as Pavilion Lake in Canada and Lake Alchichica in Mexico.

Darlene Lim from NASA Ames agrees that the deposits found by McKay's group are similar to the microbialites she studies as the principal investigator for the Pavilion Lake Research Project.

"The fundamental difference between the two is that the Pavilion Lake microbialites can grow to a larger size, and at times they are less consolidated than those reported in the waters of Gebel Uweinat," Lim says. "However, the microbialites described by Marinova et al. may have undergone some erosion, and as such their maximum size remains unknown."

Astrobiologists are very interested in microbialites as they could be a possible red flag for past life on Mars.

"We are not going to find dinosaur fossils on Mars," McKay says.

But a bathtub ring of carbonates is something that one of our rovers might potentially roll up to, he says.

Lim, however, is not convinced a rover has the capabilities to deal with the serendipitous nature of scientific discovery.

"What I hope is that someday soon a human will be able to apply their training, knowledge, and instincts, to find their way to a discovery on Mars that mirrors what Marinova et al. found in the Gebel Uweinat region," Lim says.

This story was provided by Astrobiology Magazine, a web-based publication sponsored by the NASA astrobiology program. Follow us @Spacedotcom, Facebook and Google+.