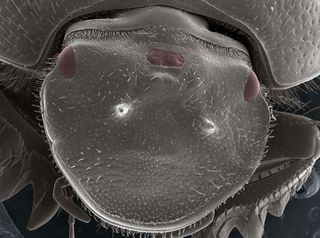 When a gene that regulates head development was negated, some beetles grew a functional extra eye.
(Image: © Eduardo Zattara)

When scientists deactivated the gene responsible in part for developing and shaping the heads of scarab beetles, the insects hatched with an extra set of compound eyes in the middle of their heads, sometimes forming together into one big third eye. And now, the scientists have learned that the extra eyes actually work.

Biologists from Indiana University discovered last year how a gene called orthodenticle prevented scarab beetles from developing these extra eyes during development. When the biologists disabled the gene, the beetles developed an extra eye (or pair of eyes). It's a common practice in science: Learn how something works, take it apart one piece at a time and see what changes.

In a new experiment, published online Oct. 24 in the journal Proceedings of the National Academy of Sciences, the same team used scanning electron microscopes to reveal that the new eyes had a complex structure, including connections to the beetle's nervous system. These eyes were no decorative or excess structures merely sitting on the beetle's head; the insects could use their new eyes, the researchers said.

"This project started from an accidental finding," Armin Moczek, a biologist at Indiana University and the senior author of the paper, told Live Science. The researchers had set out to learn how various genes determine the organization and structure of the scarab beetle's head, Moczek explained. "But we got an extra eye — totally unpredicted," he said.

For years, scientists have been using genetic modifications to grow unusual body parts on animals or to create entirely new animals, from a human ear grown on the back of a lab rat to the development of human-pig chimeras. But these beetles' extra eyes grew on their own — instead of growing the eyes there deliberately, scientists just had to knock out the preventative measures built into the beetle's genetic code. [11 Body Parts Grown in the Lab]

"There was a curious structure in the middle of the head that, when we looked closely, realized it looked a lot like the compound eyes insects usually have on the sides of their heads," Eduardo Zattara told Live Science. Zattara is a biologist who worked in Moczek's lab and is the lead author of the research who recently moved back home to Argentina to pursue ecological research.

And while extra eyes can be grown on fruit flies in a similar way, additional genetic mechanisms prevent those eyes from integrating with the flies' nervous systems and providing additional vision, Moczek said. The eyes were fully developed, clarified Zattara, but they were not wired to the brain so they couldn't transmit any visual information.

To figure out if the beetles' extra eyes did anything, the researchers took the insects in their larval stage and destroyed the cells that would give rise to their typical eyes. The scientists then shined a light into the new eyes and noted that the beetles eventually lowered their heads or turned away, just like a regular, sighted beetle would, according to the new research. Because the extra eyes provide the beetles with sensory input, it means the newly formed structures had integrated with the insect's central nervous system, the researchers said.

The findings could help explain how these animals' genetic codes define what structures go where and how it all fits together, Moczek said.

His team also hopes that this emergence of complex structures as a result of simple genetic manipulations will shine some light onto how structures like eyes evolved in the first place, he said. It takes an organism's entire genetic code to develop complex organs like eyes or brains, Moczek explained, but the first eye to emerge in the entirety of the animal kingdom arose from the reorganization of existing genetic components.

"There is a generalized feeling among many people that evolution of  acomplex trait requires complex changes at the genetic level," said Zattara. "Our results confirm several other findings that this is not necessarily the case," he added, explaining how their manipulation of just one gene that gave rise to new, functional structures goes against what many scientists expected,