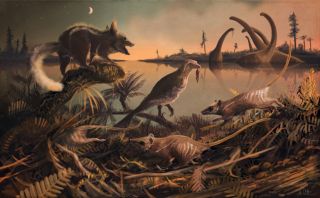 The earliest ancestors of eutherian mammals were small rat-like creatures (depicted in this illustration) that lived 145 million years ago in the shadow of the dinosaurs.
(Image: © Mark Witton/University of Portsmouth)

The earliest known ancestors of the mammal lineage that includes everything from humans, to blue whales, to pygmy shrews may have been nocturnal, rodent-like creatures that evolved much earlier than previously thought.

The identity of these ancestors comes from their teeth, which were discovered at cliffs on the coast of England. The discovery of the little creatures, which lived about 145 million years ago, may push the evolution of this mammal group back dozens of millions of years, the researchers said.

The lineage known as the eutherians includes the vast majority of all living mammals. The group excludes marsupials such as kangaroos, which carry young in pouches, as well as monotremes such as platypuses, which lay eggs. [In Photos: See How Mammals Changed Over Time]

"Eutherians are the group that led ultimately, evolutionarily, to the placental mammals, of which we're one, as well as blue whales and pygmy shrews," said study lead author Steven Sweetman, a paleontologist at the University of Portsmouth in England.

The origin of eutherians remains obscure. "We have no idea where the eutherian mammals originated, or from what — we simply don't have the fossils," Sweetman told Live Science. "Until recently, a fossil found in China called Juramaia was said to be the earliest eutherian mammal yet discovered, but subsequent studies have shown that Juramaia was almost certainly not a eutherian."

Now, Sweetman and his colleagues have discovered 145-million-year-old fossil teeth from two new eutherian species. "Our fossils are definitely of the oldest eutherians known yet in the fossil record," Sweetman said. "They lie at the base of the branch of the tree that led to placentals and, therefore, us."

The researchers discovered these fossils at the cliffs of Dorset on the southern coast of England. This process often involved toting buckets of rocks up rugged trails, "with slabs of limestone falling all the time off the pretty dangerously eroded cliffs," Sweetman said. "You have to be pretty careful collecting samples there."

Once these rocks were back at the lab, the scientists had to painstakingly break apart the clay binding the samples together using hydrogen peroxide and acetic acid — commonly found in bleach and vinegar, respectively. Study co-author Grant Smith, of the University of Portsmouth, was sifting through samples of the oldest rocks there as part of his undergraduate dissertation project.

"Quite unexpectedly, he found not one but two quite remarkable teeth of a type never before seen from rocks of this age," Sweetman said in a statement. "I was asked to look at them and give an opinion, and even at first glance, my jaw dropped!"

Although prior digs at this site uncovered primitive mammal fossils, these new discoveries were of ancient eutherians. "We had no idea we'd find these here," Sweetman said

The scientist named one species Durlstotherium newmani. Durlstotherium means "Durlston beast," referring to Durlston Bay, where the fossil was found, while newmani refers to Charlie Newman, the landlord of the Square and Compass pub in Worth Matravers, close to where the fossils were discovered. The other species was named Durlstodon ensomi. Durlstodon means "Durlston tooth," while ensomi refers to Paul Ensom, a geologist who has made numerous contributions to the paleontology of the area, the researchers said.

Back when these animals were alive, they lived in an area whose climate was similar to that of the Mediterranean today, Sweetman said. "The environment was a lagoon or a series of lagoons that were primarily freshwater, but sometimes evaporated rapidly, becoming slightly salty," he said. The area surrounding the water was relatively low-lying, "and dominated by ferns, and higher up, more well-drained areas had coniferous trees," he added.

Animals in the locale back then included a wide range of dinosaurs, other mammals, crocodile-like reptiles, lizards, frogs, turtles, fish and mollusks. "It was a very diverse environment," Sweetman said.

These newly discovered fossils are at least 20 million years older than those previously thought to be the earliest known eutherian fossils, Sweetman said. Moreover, the level of evolutionary differences seen in these newfound teeth compared with those of other ancient mammals "implies that eutherians had a very early beginning, and that diversity in eutherians arose much earlier than previously expected," Sweetman said.

The scientists detailed their findings online Nov. 7 in the journal Acta Palaeontologica Polonica.

Editor's Note: This article was updated to correct the ages of past fossils found at the cliffs of Dorset.