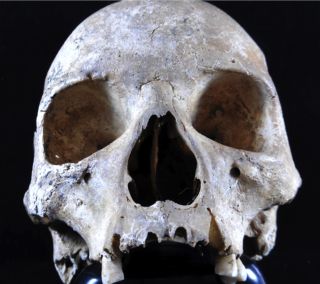 The "Woman from Hoxne" may have caught leprosy from a squirrel.
(Image: © Sarah Inskip)

More than 1,000 years ago, a woman living in the British Isles became horribly disfigured after catching leprosy from an unlikely source: a squirrel, according to a new study.

During medieval times, people kept the fuzzy-tailed rodents as pets, and their pelts and meat were crucial to then-lively trade routes between the Scandinavian countries and the British Isles, the researchers said. Given the squirrels' ubiquity at the time, it's likely that these rodents served as the vector transmitting the Mycobacterium leprae bacterium to medieval lepers, the researchers said. The researchers don't know exactly how the medieval woman contracted leprosy, but it was likely through contact with a squirrel, one way or another.

"Strong trade connections with Denmark and Sweden were in full flow in the medieval period, with Kings Lynn and Yarmouth becoming significant ports for fur imports," Sarah Inskip, who led the research at St. John's College at the University of Cambridge, said in a statement. [Fierce Fighters: 7 Secrets of Viking Culture]

Researchers found the woman's medieval-age skull and jawbone in Hoxne, a village in southeastern England, more than 30 years ago, but little was known about her. Now, a chemical analysis of the woman's skull has revealed that she died, sometime between A.D. 885 and 1015, of a strain of leprosy that's been found in human remains from then Viking-dominated Denmark and Sweden from around the same time period. The strain did not arrive elsewhere in England until centuries later.

Modern-day red squirrels living in the same area still carry a strain of the disease similar to that found on the medieval skull, which causes skin damage and gradual disfiguration. However, the last known case of human leprosy in the United Kingdom happened more than 200 years ago, the researchers said.

"This new evidence, coupled with the prevalence of leper hospitals in East Anglia from the 11th century onwards, adds weight to the idea that the disease was endemic in this region earlier than in other parts of the country," Inskip said.

To conduct their medieval forensics research on the woman — colloquially referred to as the "Woman from Hoxne" — Inskip and her team took tiny samples from crumbling parts of the skull. Then they ground up the samples and searched for signs of the leprosy bacterium's DNA.

Their findings confirmed what researchers had assumed just from looking at the skull: The woman's facial lesions were the result of leprosy, which is also known as Hansen's disease.

The chemical analysis also revealed that the woman ate a diet of wheat, barley and stew along with a small portion of animal protein, the researchers found.

Squirrels aren't the only animal known to carry leprosy. The nine-banded armadillo (Dasypus novemcinctus), which lives in the American South, can also transmit leprosy, which is curable thanks to modern-day antibiotics. But while leprosy can give squirrels lesions on their muzzles, ears and paws, it does not cause visible symptoms in armadillos, Live Science previously reported.

The new study was published online Oct. 6 in the Journal of Medical Microbiology