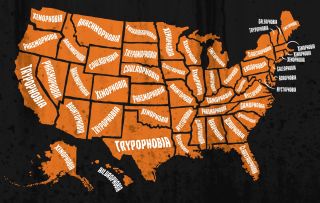 An ADT blog reveals the most commonly searched phobias by state.
(Image: © yourlocalsecurity.com)

Californians and Texans seem to suffer from a fear of holes, Georgians fear heights, and Americans generally seem to really be creeped out by the number 13 — or at least, that's what our search histories suggest.

Security company ADT has a blog called yourlocalsecurity.com, and in the spirit of Halloween, those who run the blog decided to look carefully at what scares people. The method was simple: matching up search terms with "why am I afraid of…," according to Scott Bay, author of the blog and a communications specialist at the company, who said the results don't really mean that people suffer from the actual phobia. True phobias are clinical terms and require a diagnosis from a psychologist or psychiatrist. "Our data points come from search data and merely represent what people are searching for, not necessarily the phobia they may have (if any)," Bay told Live Science.

To get the data, Bay and his colleagues looked at Google Trends, using data from a yearlong period starting in September 2016. They cross-referenced the "why am I afraid of" text string with the top 24 phobias in the United States determined by fearof.net. [What Really Scares People: Top 10 Phobias]

It's not possible to track an individual's search data, because Google Trends looks at things in aggregate. Even so, the algorithm reveals not only generalized search trends over the whole country but also a way to see where certain terms are concentrated.

The results were, in some cases, surprising — few would guess that New Yorkers seem to be really interested in claustrophobia, the fear of enclosed spaces. Half the population lives in densely populated New York City, where getting a kitchen big enough to sit down in is a relative luxury. Claustrophobia seems a common search term in Florida as well.

Other phobias — with their more exotic names — are found in California and Texas, where searches for trypophobia, or the fear of holes, was most common. Arizonans have a lot of people searching for brontophobia ― the fear of thunder and lightning. Residents of Kentucky would seem to have an inordinate fear of commitment — gamophobia — which was the most common phobia searched.

And perhaps unsurprisingly, the top two phobias searched nationwide were triskaidekaphobia (the fear of the number 13) and xenophobia, the fear of the unknown, which also gets conflated with fear of foreigners and immigrants. (The term is often used interchangeably, though it isn't quite the same thing). The third most-commonly searched phobia in the U.S. was coulrophobia, or the fear of clowns — anyone who was traumatized at a childhood birthday party might recall that one. In fourth place was trypophobia,  followed by thalassaphobia, or fear of the ocean.

An odd statistical fluke meant that while thalassaphobia was in the top five, it wasn't concentrated enough to show up as the top phobia for any state. (Clowns made it in Colorado and Nebraska. Xenophobia made it to the top spots in no fewer than nine states: Alaska, Connecticut, Illinois, Massachusetts, Minnesota, Oklahoma, Rhode Island, Washington and Wisconsin). Triskaidekaphobia made the top spot only in North Dakota. Trypophobia was in first place for California, New Mexico, Texas and Vermont.

Nevadans seem to fear ghosts (phasmaphobia). They share this one with Kansans, Oregonians and Tennesseans.

The phobias might offer some ideas for region-specific Halloween costumes. Evidently dressing up as the land shark will do well to scare people in New Jersey and New Hampshire, where galeophobia was their top-searched phobia.