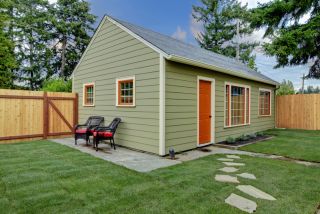 Tiny houses can make big dreams come true. For an extremely small but growing segment of the population, the diminutive dwellings are making home ownership a real possibility.

The teensy living spaces, which are usually 500 square feet or less, are often perched on the wheels of a flatbed trailer, legally making them recreational vehicles (RVs), and easy to move. These narrow homes tend to have a kitchen, bathroom and sitting area, and usually a loft bedroom.

Tiny houses appeal to home buyers who are not interested in "living large" and would never give a McMansion a second thought.

For some young people, the realities of home ownership in this economy are bleak, and tiny homes allow for entry into the market and the chance to claim something as their own, said Dak Kopec, an environmental psychologist and architect who directs the Design for Human Health graduate program at The Boston Architectural College.

"The tiny home is a relatively low-commitment venture that can be easily sold or rented, at this point in time," Kopec told Live Science. So such homes fill a need, especially for young, single people, that gives them some freedom and flexibility as they bounce between cities pursuing their career goals and personal aspirations, he said.

Whether tiny homes will turn out to be a fad or not hinges in large part on the economy, Kopec said. If the middle class continues to dwindle, the tiny homes will likely become more popular because people will need affordable housing, he said. [10 Ways to Green Your Home]

The tiny house movement began as a small grassroots effort, but the concept has intrigued so many people that it now has its own TV shows like "Tiny House Hunters" and "Tiny House Nation." There are also DIY house-building kits, and an active community of bloggers and tiny-living enthusiasts who share information and advice about the lifestyle.

Besides their lower living costs, tiny abodes have many other attractive qualities that have piqued the public's curiosity and the media's fascination with them. For example, some folks are drawn to these micro residences because of environmental concerns and their eco-friendliness.

A tiny house leaves a lighter carbon footprint, and so homeowners feel they are making a positive contribution to the world, said Sally Augustin, an environmental psychologist and the founder of Design with Science in Chicago.

With little space and limited storage, a tiny house can also be part of a conscious shift toward a simpler life. Moving into one might require dramatic downsizing of clothing, housewares, furniture and other possessions, but the benefits are less house to clean and maintain, as well as lower housing payments and utility bills.

Other advantages of "living tiny" are that people feel in control of their housing experience and have more privacy, especially if the other affordable housing alternatives involve living with roommates, Augustin said.

Having a house that's their own, no matter how tiny, may strike some people as cozy and comforting, while others might consider the living space cramped and claustrophobic.

"A tiny home is a very different way to live and some people who have a high need for uniqueness may view living in one as a psychological boost," Augustin told Live Science. [9 DIY Ways to Improve Your Mental Health]

The space constraints of tiny houses may make them unrealistic for families or older adults, she said. But still, Augustin believes that the tiny house movement has a lot going for it financially, environmentally and even psychologically, and she suspects the trend will continue to grow, with communities of tiny homes popping up featuring shared facilities for self-storage, laundry or socializing.

She shared a few design tips to make tiny houses — or any small living space — seem more spacious. Using light colors on the walls, like a light sage green, can make a room seem larger and more relaxing, Augustin said.

Maximizing natural light can improve a person's mood, and seeing wood grains has a calming influence, whether as hardwood flooring or exposed wooden surfaces.

She also said to make sure there are sound-absorbing surfaces, such as rugs or curtains, so the living space doesn't feel like a box and it's not too echo-y. Using curvy rather than rectilinear patterns in towels or a rug on the floor can also be comforting, Augustin suggested.

Although storage will be at a premium, tiny-house dwellers should find ways to tuck things out of view so the space is not too complex visually, she said.

She also recommended, "Don't make these living environments too stark. Personalize a tiny home in small ways to feel comfortable living there."