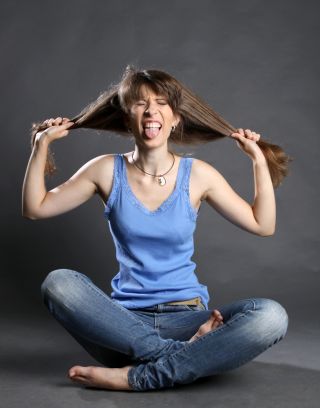 A new tool may help therapists identify people for whom relaxation techniques such as meditation can actually raise anxiety.
(Image: © photovova | Shutterstock.com)

Deep breaths, yoga, a lazy day at the beach: While some may find those activities soothing, their mere mention can set other people's nerves on edge.

Now, a new method may help therapists measure just how much relaxing stresses people out. The new tool, which will be presented Saturday (Nov. 16) at the annual convention of the Association of Behavioral and Cognitive Therapies, should help therapists know when to say "breathe in…" and when to steer clear of relaxation techniques.

"For a lot of different anxiety disorders, we use relaxation as a treatment," said Christina Lumberto, a psychology doctoral candidate at the University of Cincinnati. "But for the people who don't like that, it's not a helpful treatment."

In the 1980s, psychologists first noticed that some people doing relaxation exercises would actually get quite anxious.

"At first, you do see decreased heart rate, decreased breathing, things that indicate relaxation," Lumberto told LiveScience. "After they have achieved a relaxed state, all of a sudden everything just spikes back up."

Because so many modern anxiety treatments use mind-body relaxation techniques such as meditation, Lumberto and her colleagues wanted to identify patients for whom these techniques might backfire. [7 Reasons You Should Meditate]

They created a 21-point questionnaire and tested it on 300 undergraduate students. The survey asks people to rate, on a scale of 0 to 5, how much they agree with statements like, "It scares me when my breathing becomes deeper;" and, "I hate getting massages because of the feeling it creates when my muscles relax."

The questionnaire captures the myriad reasons why people might have trouble winding down, from feeling lazy to an intense fear of being out of control.

"Some people don't like to relax because of the physical changes, the sensations of their muscles relaxing," she said. "Other people will say they don't like relaxing because they're actually worried about whether or not they're relaxing correctly."

People who fear calming techniques may be more sensitive to changes in their normal physical state, such as changes in heart rate or blood pressure, regardless of whether they're due to relaxation or to anxiety, Lumberto said.

The relaxation-phobic tend to be more anxious in general, she said. (Oddly, those who fear relaxation are also more prone to asthma, Lumberto's past research has found.)

Instead of diving into meditation, the relaxation-averse may need to dip their toes in first, using a technique called exposure therapy, which is more commonly used to conquer fears of wide-open spaces or spider phobia, she said.

Of course, just because you dislike yoga or lounging on the beach doesn't mean you have a problem.

"The point where it becomes problematic is if it really gets in the way of living your life," Lumberto said.