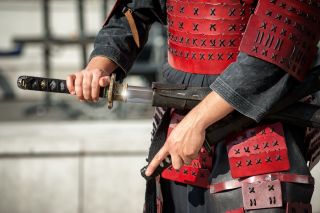 A samurai unsheathes his traditional katana in this stock image.
(Image: © zummolo/Shutterstock)

What should you name a baby samurai? What food should a samurai bring to a battle? What is a samurai's most treasured possession? A newly translated 450-year-old book supposedly written by a renowned samurai provides answers to these and many other questions about the Japanese swordsmen.

Called "The Hundred Rules of War," the book is a series of songs that could be sung by samurai, who had never gone into battle. It was supposedly written in Japanese in 1571 by a famous samurai named Tsukahara Bokuden, who lived from 1489 to 1571, during a war-ridden time in Japan. Stories told about Bokuden claim that he fought in over 100 battles and slew hundreds of swordsmen.

The book was recently translated into English by Eric Shahan, who specializes in translating Japanese martial-arts texts. The book was first printed in Japanese in 1840, and has been republished in Japanese several times since then, Shahan told Live Science. [In Photos: The Last Century of Samurai Swordsmen]

Though the text says that Bokuden wrote this book (which was re-copied over the centuries), that claim is impossible to verify, Shahan said. "[It] isentirely possible [that Bokuden is the author] but I have no way to confirm how authentic [the book] is," Shahan told Live Science.

The Hundred Rules of War

"Samurai study a great many things; however, the single focus of their learning is death," one of the rules in the book says, as translated by Shahan. The rules in the book cover a wide variety of topics related to warfare, including archery, swordsmanship, spear fighting and horsemanship.

"The most treasured possession a samurai possesses is his horse. Those who do not spend time to learn about horsemanship are cowards," one of the rules in the book says. The text also seems to equate small horses with a small samurai mind: "While small horses may be easier to handle as well as dismount from, those who prefer such animals are a bit dim witted," one of the book's rules says. [Photos: 19th-Century Martial Arts for Cops]

The rules also highlight the importance of archery, even suggesting that the best name for a baby born into the samurai class is "Yumi," which means "bow."

"To one born a samurai, the name Yumi is best. The name should be revered and held as high as the pine tree of Takasago," one of the rules reads in the new translation. The "pine tree of Takasago" probably refers to two pine trees at the Takasago shrine that grow from the same root, Shahan noted in the book. The trees, he said, "represent eternity and long life."

"If a samurai is preparing to step onto the field of battle, it is wise to avoid eating anything other than hot water poured over rice," a rule reads.

Such a samurai may also want to drink a bit of alcohol in the days leading up to the battle. "Samurai that drink to excess are liable to blunder, while on the other hand samurai that do not drink are cowards," according to another of the book's rules.

The book strongly advises that samurai, in addition to weapons and armor, bring roasted beans and dried plums with them into battle.

"Of the things a samurai carries on the field of battle know that there is nothing better than plums that have been dried in the sun," reads one of the book's rules. To help understand this rule, and others, Shahan consulted a copy of the book that was reprinted in 1938 by Hori Shohei, a practitioner of Kendo — a martial art that mainly uses swords. Shohei explained in his reprint that dried plums could quench a parched throat.

Why roasted beans? "Samurai should remember that neglecting to carry around roasted beans may result in being caught out," reads part of the book.

As for why samurai would benefit from such beans, Shahan isn't certain. "Possibly this means to carry around some food that will not spoil and can be eaten in case rations are not distributed," Shahan told Live Science.

In any case, regardless of what food, weapons or equipment that are brought into battle, samurai should never be concerned about whether they live or die, the book emphasizes.

"Samurai cast off thoughts of both life and death, their mind is set on moving forward," reads one of the book's final rules.