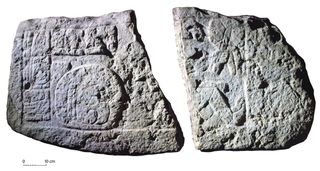 The ballplayer in Monument 3 is wearing an elaborate belt and holding an object with streamers (likely a fan).
(Image: © Christophe Helmke; Copyright Antiquity)

The long-lost Maya ruins of Tipan Chen Uitz in Belize are only beginning to give up their secrets, with the latest discovery being something of a home run: Archaeologists found two table-size stone panels, depicting elite ballplayers, that likely would have greeted subjects walking by the palace, according to a new study.

The discovery of these two panels reinforces the idea that the Maya people would have placed a lot of importance on the ballgame, and suggests that it helped the Maya connect with different communities in their vast network, the researchers said.

"[These monuments] speak to the extent to which Tipan was embedded in these very complex political relationships between ruling elites across the Maya area," said study senior researcher Christopher Andres, an adjunct research associate at Michigan State University who specializes in Maya archaeology. [Photos: See the Maya Ballplayers Carved into the Stone Panels]

Andres and his colleagues learned about the Tipan site while working on another archaeological project in Belize, in 2009. Some locals said they knew about an undocumented Maya site in the jungle and agreed to take them there.

Once they arrived, they were "blown away," Andres told Live Science. "We were all pinching ourselves," he said, "because we were not expecting to be taken to a site that was so large."

Thousands of Maya likely once lived in Tipan, Andres said. The site has the ruins of a ball court and "a very impressive palatial complex, which is part of what we were excavating when we discovered these [ballplayer] monuments," Andres said. "The monuments essentially seem to have been part of the façade to the entrance to the palatial complex, where presumably the ruling elites of Tipan would have lived."

Discovered in 2015, the two ballplayer panels are the first of their kind to be found in Belize, the researchers said. Both have carvings depicting ballplayers and hieroglyphic captions, and they are thought to date to between about A.D. 600 and A.D. 800, Andres said.

One monument (dubbed Monument 3) was found cracked in two and lying facedown. It would have measured about 4.7 feet long, 2.1 feet tall and 0.6 feet wide (1.4 by 0.7 by 0.2 meters). It had only "minor damage and moderate weathering," allowing the archaeologists a good view of its carving — a large ball next to a ballplayer who is wearing a protective belt and holding a staff-like object with streamers (possibly a fan), the researchers said.

"The panel may depict a ballgame that was celebrated within the ballcourt at Tipan Chen Uitz, or commemorates such a game played at an allied site," the researchers wrote in the study.

The hieroglyphics say, "nine-hand-span ball," but it's unclear if this length refers to the length of the latex strip used to make the ball, or to the circumference of the ball itself, the researchers said. There is also a calendar date that may translate to A.D. May 18, 716, and glyphs for the verb "grasp" and the ballplayer's name; this ballplayer may have sported the nickname "Waterscroll Ocelot," they added. [Prince's Tomb: Images from a Mayan Excavation]

The second panel (Monument 4) was discovered faceup, but about one-third of it is missing. It measures about 2.6 feet long, 1.8 feet tall and 0.6 feet wide (0.8 by 0.6 by 0.2 m), and shows a man wearing a distinctive ballplayer belt. This action-figure-like carving shows a moment when "this figure lunges forward and braces his left knee, leaning on his left hand as though attempting to strike a ball," the researchers wrote in the paper.

Curiously, part of the ballplayer's name — translated from hieroglyphics as "bird of prey is the mouth of celestial fire" — is also seen at a ball court in Naranjo, a major Maya site in modern-day Guatemala. It's possible these carvings refer to the same person, which would provide a connection between the two sites, the researchers said. Moreover, there is also architectural evidence hinting that Tipan had connections with Naranjo, Andres said.

At its peak, the Maya civilization encompassed all of modern-day Mexico, Belize, Guatemala and parts of Honduras, Andres said. But it wasn't ruled as an empire. Rather, there were different areas that had hierarchal communities: a central, powerful community on top, and smaller secondary and tertiary communities beneath it, Andres said.

"Tipan was likely at the center of a polity," but it wasn't the largest polity on the map, he said.

The ballplayer monuments reveal that "Tipan was the seat of an influential royal court" that could afford to commission scribes to create monuments, the researchers wrote in the study. The panels also suggest that, like other Maya centers, Tipan had "public performances involving vassals and overlords participating in the ballgame," the researchers wrote in the study.

"[But] we're not sure, exactly, what the level of interaction would have been," Andres said.

The study is published in the October issue of the journal Antiquity.