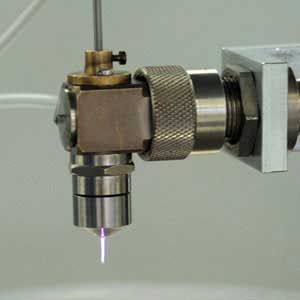 This purple beam of "cold" plasma could help kill germs as part of cavity treatments one day.
(Image: © Stefan Rupf)

A new study shows that bacteria-killing jets of plasma could soon replace the drills used to treat cavities in our teeth, making visits to the dentist's office a bit less nerve-racking.

Plasma is the fourth state of matter, after solids, liquids and gases. It is formed when gases are energized to the point where electrons fly off some or all of their atoms.

"I think plasma will provide additional advantages [in treating cavities], namely by not drilling into or removing dentin so deeply," said Stefan Rupf, an assistant professor of dentistry at Saarland University in Germany and lead author of a study on the work in next month's issue of the Journal of Medical Microbiology.

Dentin is the fibrous, bonelike material that makes up most of a tooth under the outer enamel layer. As bacteria in our mouths chow down on sugars, they produce an acid that eats into these teeth layers, eventually boring cavities.

Cavities can cause a great deal of pain, and if left untreated can lead to serious infections and even death.

Dentists typically use drills to grind away the diseased portions of teeth where the germs have set up shop prior to putting in a filling to restore the tooth's shape.

Rather than relying on a drill's brute force, dentists seek less invasive ways of wiping out stubborn, tooth-decaying bacteria.

Enter plasma. In most cases, plasma requires heat to form. Lightning strikes and the superhot plasmas that make up the sun and other stars are common examples of hot plasmas.

These phenomena, however, are quite ill-suited for dentistry. Instead, "cold" plasmas with a temperature of about 100 degrees Fahrenheit (38 degrees Celsius) are made in the lab by partially ionizing helium gas with pulses of microwaves lasting just millionths of a second.

To test how well these plasma jets sterilize tooth material, Rupf and his team took slices of dentin from extracted human molars and doused them with bacteria. These samples were then torched by the plasma jet for six, 12 or 18 seconds.

Rupf said he and his team are not sure exactly how the plasma jet kills the bacteria, but heat is not the weapon.

When moving the plasma jet, the temperature of the dentin increased only to between 102 and 110 degrees Fahrenheit —hot, but not searing enough to kill microbes or harm tissue, said Rupf.

An inspection of the damage done to the germs on the dentin slices via a scanning electron microscope provided clues, though: Some bacterial remnants had holes in their cell walls, or exterior skin-like structures.

While the plasma jet fires, it charges oxygen gas in the surrounding air, creating highly reactive molecules that can break down the bacteria's defenses. "What we think is that the reactive oxygen species are able to penetrate and to destroy bacterial walls," Rupf told TechNewsDaily.

As for whether these plasma jets can assure pain-free dentistry without the high-pitched whine of drills, Rupf thinks it is certainly possible. Fingers, for example, can be temporarily placed under the beam without discomfort.

Yet if hovered in one place too long, current plasma jets can dry out dentin and cause it to crack. "You should aim the plasma jet only on the surface that has to be treated," Rupf said.

Parish Sedghizadeh is an assistant professor at the University of Southern California School of Dentistry who works with plasmas but was not involved with the new study.

"This technology should eventually provide clinicians with a powerful tool, Sedghizadeh said.

Rupf thinks that the plasma jet could become dentist-tray ready in perhaps as little as three to five years. "We need a little time to learn more about it," he said.