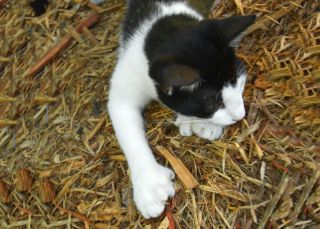 All 54 cats, and the 10 people who stayed with them during the storm, are safe, David Gonzales, a curator at the house, told MSNBC on Sunday (Sept. 10). Gonzales and his colleagues took the cats inside the Ernest Hemingway Home & Museum, which has 18-inch-thick limestone walls, according to the New York Times.

The "Hemingway cats" are famous not only for occupying the historic home and lounging on its grounds, but also for having six toes. (Cats usually have five front toes and four back toes, according to the Museum.) The extra digit is an inherited trait, resulting from the "polydactyl gene." All of the cats carry this gene, but only about half display the trait, the Museum said. Many of the cats are decedents of Hemingway's cat called Snow White, which also had six toes.

Some of the cats appeared to sense the storm coming. "When we started to round up the cats to take them inside, some of them actually ran inside knowing it was time to take shelter," Gonzales said.

Hurricane Irma slammed into the Florida Keys on Sunday (Sept. 10), causing widespread damage, including flooding and destroyed homes, according to news reports.