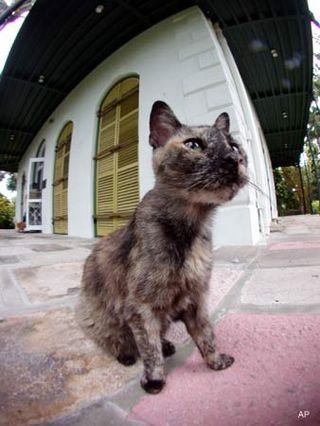 Rags, one of the six-toed descendants of the cats given to Ernest Hemingway, hangs out near the Hemingway House Tuesday, Aug. 29, 2006. The home and museum were closed, but a small staff remained to make sure that the home's nearly 50 cats were comfortable as Tropical Storm Ernesto approached.
(Image: © Wilfredo Lee/AP)

KEY WEST, Fla. (AP) -- The many cats that roam the grounds of the Ernest Hemingway home include Ivan, Frances and Charley -- all kittens born during the destructive hurricane season of 2004.

But the home and museum's manager, Jacque Sands, has drawn the line: "We do not want one named Ernesto.''

The cats -- 44, at last count -- are denied little else. Among Key West's numerous attractions, the felines are local celebrities, adorning postcards, prints and magnets.

And whenever a storm looms, special precautions are taken to safeguard the tribe, descendants of a six-toed feline given as a gift to Hemingway in 1935.

The novelist lived in the home 10 years, and wrote "A Farewell to Arms'' and "To Have and Have Not'' there. All the cats carry the gene for six toes, though not all display the trait.

As Ernesto sloshed ashore Tuesday, Sands said she was planning to stay the night at the home to make sure the cats stayed comfortable.

Of her priorities during rough weather, "I would say the cats are number one,'' she said.

A double supply of cat food is kept on hand during hurricane season, she said. Bowls of food and water were tucked Tuesday in dry places around the porch and inside one of the open buildings on the one-acre property.

The chief task of the cats -- many of whom are named after famous actors and literary figures from Hemingway's time -- was trying to stay dry.

Younger ones napped in a "kitty condo,'' a replica of the Hemingway house, while others like 10-year-old Charlie Chaplin rested on the porch.

Some cats pranced down to the home's dry basement, which Hemingway used as a wine cellar. Archibald MacLeish, who usually lounges on Hemingway's bed, found the house shuttered and sat instead outside the front door.

"Some come to pay homage to Hemingway -- but to see the cats, too,'' Sands said.