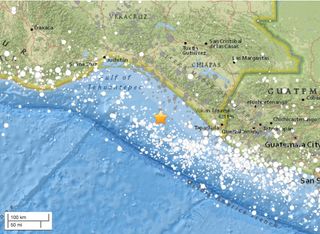 The Mexico earthquake occurred where one of the slabs of Earth's crust is slowly diving beneath another near the Middle American Trench in the Pacific Ocean.
(Image: © USGS)

The strongest earthquake to hit Mexico in 100 years struck off the country's southern coast late Thursday night local time, officials report. So far, 32 people are reported dead from the magnitude-8.1 temblor, which was felt by 50 million people across Mexico, according to news reports.

The powerful earthquake hit the country at 04:49:21 UTC on Friday (Sept. 8), which was 11:49 p.m. local Mexico time. The shaking was felt as far away as Guatemala and Mexico City, according to a CNN report. The epicenter of the quake occurred 54 miles (87 kilometers) southwest of Pijijiapan, in the Mexican state of Chiapas.

New York Times reporters in Mexico City described the terrifying scene: "The force sent residents of the megacity fleeing into the streets at midnight, shaken by the alarms blaring over loudspeakers and a full minute of tremors. Windows broke, walls collapsed, and the city seemed to convulse in terrifying waves."

The earthquake occurred as a result of a process called subduction. In this case, a slab of Earth's crust called the Cocos plate is slowing diving beneath the North American plate; This movement is happening in the Pacific Ocean near the so-called Middle American Trench, which is beneath Central America, just over 62 miles (100 km) southwest of Friday's earthquake, according to the U.S. Geological Survey (USGS).

The earthquake led to a tsunami watch, but the Pacific Tsunami Warning Center at the U.S. National Weather Service has reported waves of just about 3 feet (1 meter) off of Mexico's coast, The Washington Post reported.

This region has experienced eight other magnitude-7 or greater earthquakes over the last century, with most of these occurring near the Mexico-Guatemala border. The largest of those quakes was a magnitude-7.4 that occurred offshore of Guatemala in November 2012, causing 48 deaths and 150 injuries, the USGS said.

Editor's Note: This story was updated to update the number of fatalities and include information on the tsunami risk.