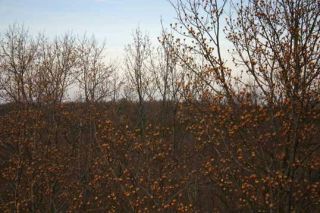 Trees in the Eastern United States are growing faster than they have in the last two centuries in response to Earth's warming climate, a new study finds.

For more than 20 years forest ecologist Geoffrey Parker, based at the Smithsonian Environmental Research Center outside Washington, D.C., has tracked the growth of 55 stands of mixed hardwood forest plots in Maryland.

Parker's tree censuses over this period have revealed that these forested areas are packing on weight at a much faster rate than expected; on average, the forests are growing an additional 2 tons per acre annually. That works out to the equivalent of a tree with a diameter of 2 feet (0.6 m) sprouting up over a year.

Parker and Smithsonian Tropical Research Institute postdoctoral fellow Sean McMahon traced the growth in forest stands with trees that ranged from 5 to 225 years old. The accelerated growth was seen in trees of all ages. More than 90 percent of the tree stands grew two to four times faster than would have been predicted from their baseline growth over time.

Checking trees of all ages also showed that the growth spurt was a recent phenomenon; if the older trees had grown at this faster rate all their lives, they would be much bigger than they are. And so the researchers could conclude in the past 20 years or so these trees shot up faster than they did centuries ago, when the oldest trees studied were alive.

Parker and McMahon investigated what might be causing this recent surge in tree growth.

"We made a list of reasons these forests could be growing faster and then ruled half of them out," said Parker. The ones that remained included increased temperature, a longer growing season and increased levels of atmospheric carbon dioxide — all effects or causes of climate change.

During the past 22 years carbon dioxide levels at the Maryland site have risen 12 percent; the mean temperature has increased by about a half a degree Fahrenheit (three-tenths of a degree Celsius); and the growing season has lengthened by 7.8 days. So the trees now have more carbon dioxide fuel to carry out photosynthesis for growth, along with an extra week to put on weight. Parker and McMahon suggest that a combination of these three factors has caused the forest's accelerated biomass gain.

Parker thinks there is every reason to believe his study sites are representative of the entire Eastern deciduous forest, the regional ecosystem that surrounds many of the population centers on the East Coast. He and McMahon hope other forest ecologists will examine data from their own tree censuses to help determine how widespread the phenomenon is.

Understanding the response of this regional ecosystem is important, because changes in tree growth rates can have significant ramifications on weather patterns, nutrient cycles, climate change and biodiversity, researchers say.

Funding for the research, which was detailed in the Feb. 1 issue of the journal Proceedings of the National Academy of Sciences, was provided by the HSBC Climate Partnership.