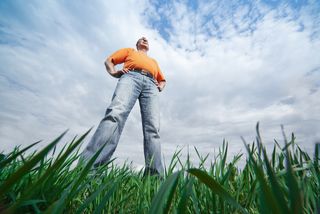 Your height may be linked to your risk of blood clots: A new study from Sweden found that taller men and women were more likely to develop blood clots in their veins than their shorter counterparts were.

Venous blood clots affect up to 600,000 Americans each year and are the third-leading type of blood vessel problem, after heart attack and stroke, the AHA says.

In the new study, published yesterday (Sept. 5) in the journal Circulation: Cardiovascular Genetics, the researchers looked at data on more than 2.5 million Swedish adult siblings who didn't have a venous blood clot when the study began. Using the Swedish Hospital Register, a national database that includes information on hospital patients' medical diagnoses, the researchers identified who had a blood clot during the 30- to 40-year study period.

By including siblings in the study, the researchers could account, in part, for genetic factors that may increase a person's risk of blood clots, the study said. The researchers found that among same-sex sibling pairs, the risk of venous blood clots was significantly lower in siblings at least 2 inches (5 cm) shorter than their taller siblings.

The study didn't look into why height was linked to risk of venous blood clots.

"It could just be that because taller individuals have longer leg veins, there is more surface area where problems can occur," lead study author Dr. Bengt Zöller, an associate professor of internal medicine at Lund University in Sweden, said in a statement.

Gravity may also play a role in the possible link: There's more gravitational pressure in the leg veins of taller individuals, and that can increase the risk of blood flow slowing or temporarily stopping, Zöller said.

The researchers noted that the study had several limitations. For example, the researchers didn't account for lifestyle factors — such as smoking, diet and physical activity — that could increase a person's risk for venous blood clots. In addition, the research was done in Swedish adults, and the results may not apply to Americans or other nationalities, the researchers said.

Zöller acknowledged that a person can't do anything to change their height. However, he suggested that health care workers take height into consideration when looking at a person's risk of developing venous blood clots.