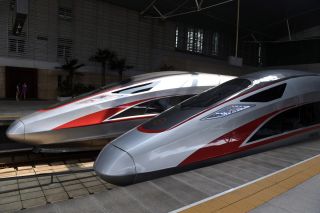 China was once home to the world's fastest trains, but that position was temporarily derailed in 2011, after a crash between two bullet trains killed 40 people and injured nearly 200 more, leading officials to scale back maximum train speeds from 350 km/h (217 mph) to 300 km/h (186 mph).

But the country is getting back on track, as the next generation of bullet trains — said to be the world's fastest — began transporting passengers Monday (Aug. 21) on the Beijing-Tianjin Intercity Railway, according to the state-run Xinhua News Agency.

Dubbed "Fuxing," which means "rejuvenation," the new high-speed trains are expected to expand service starting Sept. 21 to run between Beijing and Shanghai, traveling at speeds of up to 350 km/h (217 mph). But the trains are capable of going even faster. With maximum speeds of 400 km/h (249 mph), they are the fastest trains in the world, Xinhua News Agency reported. [Hyperloop, Jetpacks & More: 9 Futuristic Transit Ideas]

First unveiled in June, the Fuxing bullet trains were tested on July 27 at their maximum speed. They will operate seven round-trips daily between Beijing and Shanghai, and are expected to reduce travel time from 5 hours (at the current speed of 300 km/h) to 4 hours and 30 minutes, according to the Xinhua News Agency.

To put the speed of the Fuxing trains into perspective, the maximum speed of Amtrak intercity high-speed trains in the U.S. is 150 mph (241 km/h), and only half of the trains run at speeds of 100 mph (161 km/h) or more, according to the railroad's website.

Other types of transportation systems may promise ultra-high-speed travel, but they still have a long way to go before they're passenger-ready.

In Japan, testing is currently underway for trains capable of traveling at up to 500 km/h (310 mph) using magnetic levitation — so-called "maglev" technology — but they won't be operational until 2027. And billionaire entrepreneur Elon Musk's proposed "Hyperloop," a tube track that could carry people in air-cushioned pods at speeds of up to 760 mph (1,220 km/h), is still preparing for a preliminary testing stage, which will be conducted at 200 mph (322 km/h).