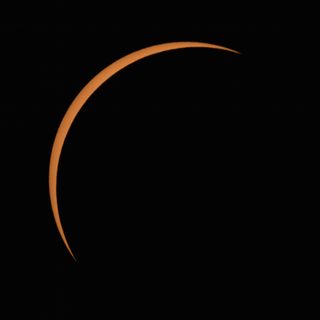 The moon passes in front of the sun at the point of the maximum partial solar eclipse near Banner, Wyoming today (Aug. 21).
(Image: © Joel Kowsky/NASA)

For a few surreal minutes across a narrow strip of the United States, the sun was completely blocked by the moon today (Aug. 21). This amazing astronomical event was highly anticipated by scientists, many of whom spend their lives studying the science behind it.

From sheer awe to Pac-Man jokes, here are some of the scientists' reactions on Twitter to the Great American Solar Eclipse.

Most scientists in the path of totality captured stunning shots of the total eclipse. Eric Christian, a research scientist at NASA, captured a stunning shot of the eclipse at totality using a handheld camera.

Michio Kaku, a theoretical physicist at the City University of New York, was in the path of totality in Missouri and had this to say:

The eclipse left at least a few scientists at a loss for words. Mike Brown, a physicist at the California Institute of Technology who's most famous for demoting Pluto from its planet status, had just this to say:

Other scientists, like theoretical physicist Brian Greene, didn't quite make it to the path of totality. But he was able to capture some great shots, thanks to a colander:

Neil deGrasse Tyson, a notable astronomer and science popularizer, couldn't resist putting up this downer factoid in the days before the eclipse. Way to kill people's excitement, NdGT!

Others, like U.K.-based biologist Richard Dawkins, used the eclipse as an excuse to note science's achievements.

Still others, however, went for a more universal and inspiring response:

Some scientists tied the eclipse to the current political situation, if obliquely, by noting that President Donald Trump was photographed squinting directly at the sun without eclipse glasses.

Michael Mann, a climate scientist at Pennsylvania State University, used the eclipse as an excuse to have a bit of fun.