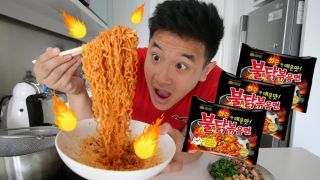 Scarfing spicy food has become something of an extreme sport, but one food video blogger had a severe reaction to a recent eating challenge: 2 minutes of deafness. And he captured all of the sweat, pain and tears on video.

"The pain went all the way up to my ears to the extent where they were blocked," said Ben Sumadiwiria, who published a video of himself eating "death noodles" in Indonesia late last year. Sumadiwiria's YouTube channel features several additional videos of he and his friends chowing down on noodle bowls that make their skin flush and their eyes water.

But how could chili peppers make someone go deaf, even temporarily? There's no certain medical answer, but it could have to do with the intricate connections between the mouth, throat and ears. [Tip of the Tongue: The 7 (Other) Flavors We Can Taste]

The noodles Sumadiwiria ate in Indonesia were made with 100 bird's eye chilies, also known as Thai chilies. These small, red chilies pack a big punch — they have between 100,000 and 225,000 heat units on the Scoville scale that's used to measure spiciness, making them 45 times hotter than a jalapeño. (The hottest pepper on record is a Carolina reaper pepper grown in South Carolina, which is 440 times hotter than a jalapeño, though the dragon's breath chili may be another contender for the top spot.)

Sumadiwiria is no wimp when it comes to spice: He makes his own chili sauces and pickles chilies for a snack, he told Live Science. But the chili-packed noodles had him sweating, turning red and declaring the pain the worst he'd ever felt.

"I can't hear anything, man," he says in the video, shortly before dousing his head in cold running water.

The heat-creating compound in chili peppers is called capsaicin, and it might have evolved to protect the plants against fungus. Capsaicin irritates human cells, especially the mucous membranes that line the mouth, throat, stomach and eyes. Small amounts cause a burning sensation as pain receptors in the membranes react to the irritant. With increasing concentrations, the body ups the ante in an effort to protect itself: It produces snot and copious tears to try to form a barrier between itself and the capsaicin. It releases endorphins to inhibit the transmission of pain, which can sometimes make the mouth feel numb.

This numbness effect is why capsaicin is sometimes used to relieve chronic pain, said Dr. Michael Goldrich, an otolaryngologist at the Robert Wood Johnson University Hospital in New Jersey. Capsaicin creams first increase pain and burning, Goldrich said, but shortly after, they inhibit the pain-carrying nerves.

But back to spicy noodles: Consuming extremely high levels of capsaicin can even makethe throat or mouth blister, New Mexico State University horticulturalist and chili expert Paul Bosland told Live Science in 2012. These blisters are an attempt by the mucous membrane to sacrifice the top layer of cells and cushion deeper layers with a protective bubble of pus, Bosland said.

There are a couple of reasons someone might experience a sensation of hearing loss after eating spicy food. The throat and the ears are connected by conduits known as the Eustachian tubes, which help equalize pressure in the inner ear. When the nose starts producing lots of snot — as it does when you scarf down something spicy — this can block the Eustachian tubes, Goldrich told Live Science.

"Then, as a response, people would feel that their hearing was down," Goldrich said. It's the same phenomenon that makes the world sound wrapped in cotton batting when you have a bad cold.

Another possibility is that the hearing loss is the effect of hyperstimulation of the trigeminal nerve, said Dr. Sam Marzo, chair of Loyola Medicine's Department of Otolaryngology and an expert in hearing loss. The trigeminal nerve supplies sensation and motor control to the mouth and face, and it connects to the cochlear nerve, which is responsible for transmitting auditory information, Marzo told Live Science.

People who suffer from migraines sometimes temporarily lose their hearing because overstimulation of the trigeminal nerve changes the permeability of the blood vessels that supply the cochlear nerve. Something similar could have happened to Sumadiwiria with the hot peppers, Marzo said.

"You are stimulating the trigeminal nerve, and that causes changes in blood flow in the cochlear nerve, giving you a temporary hearing loss," he said.

When the stimulation subsides, so does the hearing loss. But some blood-flow changes to the cochlear nerve can cause permanent damage, Marzo said, so if the feeling of hearing loss doesn't subside quickly, regardless of the cause, it's best to see a doctor.

"If you are eating a food or taking a medication and you have changes to your hearing or your vision that don't improve, get help immediately," he said. "Don't wait."

Despite Sumadiwiria's experience, though, capsaicin might be more likely to protect hearing than to damage it. A particularly effective treatment against many cancers, platinum-based chemotherapy, has the unfortunate side effect of damaging the hair cells in the ear that are responsible for sensing sound waves, Goldrich said. Some very early research suggests that capsaicin given at the same time as chemotherapy may protect the hair cells and prevent hearing loss, he said. No one yet knows why this spicy compound might have this effect, Goldrich said, but studies are ongoing.