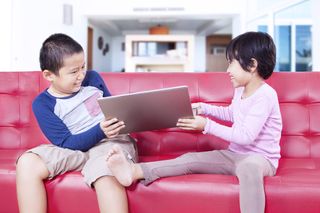 WASHINGTON — Why do some siblings get along while others are at each other's throats? Gender could play a role: A new study finds that men reported having a greater sibling rivalry than women did back when they were children. However, these differences seemed to fade by adulthood, the researchers said.

Lead study author Hillary Murdoch, who conducted the research when she was a psychology student at Albright College in Pennsylvania, had hypothesized that there would be greater rivalry between same-sex siblings.

The study found, however, that sibling makeup (in other words, same-sex siblings or opposite-sex siblings) didn't seem to have an effect on their relationships. But gender did stand out in the study: The males surveyed felt more sibling rivalry as children than the females reported feeling, Murdoch told Live Science yesterday (Aug. 4), here at the American Psychological Association's annual meeting, where she presented her findings. [25 Scientific Tips For Raising Happy (& Healthy) Kids]

In the study, the researchers surveyed 210 adults in 18 states who were raised with one or more siblings in the same household. The people in the study ranged in age from 20 to 78. In one part of the survey, the participants were asked to rate their relationship with a sibling in childhood on a scale of 1 to 10, from close to rivalrous.

Compared with women, the men reported having had more rivalrous relationships with siblings as children: On average, men rated their relationship with their siblings as a 5.2 on the scale, compared with an average rating of 4.8 among women. It wasn't clear, however, why this difference existed between men and women, Murdoch said.

Parents appeared to play a role in how well siblings got along. Some of the people in the study who had close sibling relationships, for example, reported that their parents praised each of their children and didn't encourage competition between siblings, Murdoch said. But when parents pit siblings against one another, by encouraging competition or comparing siblings to one another, it creates more rivalry, she said.

Many study participants said that as they matured, they felt closer to their siblings, Murdoch said. In some instances, the death of a parent played a role in helping the siblings to grow closer, she added.

The survey also included questions about childhood experiences, including divorce or abuse by parents. The researchers found that these events often helped siblings become closer in childhood.

Murdoch noted that one of the limitations of the study was that some people opted not to participate because of particularly rivalrous sibling relationships, so the data may be biased toward individuals with better sibling relationships. People were afraid to fill out the survey because they thought they'd get too emotional, Murdoch said.