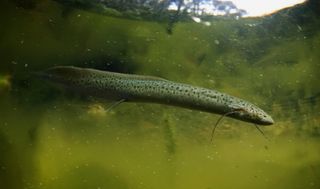 What fish species will drown if you hold it underwater for too long? THIS GUY. Pictured: An African lungfish (Protopterus dolloi).
(Image: © Paulo Oliveira/Alamy)

Most fish would be left high and dry during drought periods when the bodies of water they inhabit shrink and disappear — but African lungfish aren't most fish.

Even under normal conditions, lungfish are air breathers, relying on gills that interact with functional lungs to provide their oxygen. But when temperatures heat up and their watery habitats disappear, African lungfish respond by tunneling underground and generating a leathery enclosure that retains moisture but still allows enough air flow around their bodies for them to keep breathing — with no water required.

A video recently shared online by the National Science Foundation (NSF) reveals lungfish in Ghana as they are extracted from the dirt in their cocoon-like pods. This unusual adaptation allows them to survive in extensive dry conditions that would be fatal to most forms of water-dwelling life. [Photos: The Freakiest-Looking Fish]

The video, which does not reflect NSF research, was shot by the American nonprofit organization Ghana Mission Fund, according to a description on the NSF website. In the footage, a group of people dig up oblong lungfish cocoons from dry earth, tearing the structures open to reveal the damp and wriggling fish inside.

There are six species of lungfish that fit into three genuses (or "genera"), and they are currently found in Africa, South America and Australia. Lungfish fossils date back 400 million years, and lungfish are thought to be a common ancestor of all tetrapods — animals with four limbs — researchers wrote in the book "The Biology of Lungfishes" (CRC Press, 2016).

Buried lungfish exhibit a behavior known as estivation — a type of dramatically reduced metabolic activity during periods of prolonged heat or dryness, NSF researcher and ichthyologist Prosanta Chakrabarty said in the video. All four species of lungfish in Africa — Protopterus dolloi, Protopterus aethiopicus, Protopterus amphibius and Protopterus annectens — can surround themselves in protective cocoons to keep from drying out, "The Biology of Lungfishes" authors wrote.

During drought conditions, when the lungfish's pools begin to dry up, they burrow into mud and secrete a layer of mucus that hardens into a protective shell, according to the University of California Museum of Paleontology (UCMP). Once inside the cocoon, the fish gulp air using their lungs, and then networks of blood vessels in their swim bladders help to extract the oxygen, UCMP explained.

Lungfish estivation lasts until enough rain accumulates for them to swim again, and they can remain in this hibernation state for up to four years, Chakrabarty said. And estivating, cocoon-encased lungfish brought into a laboratory were kept alive for up to six years, according to "The Biology of Lungfishes" authors.

Along with air breathing, lungfish share something else in common with land animals: walking ability. African lungfish have four slender appendages that aren't quite fins and aren't quite legs, but they can use their scrawny hind limbs to "hop" forward, scientists discovered in 2011. While lungfishes' rudimentary "walking" doesn't get them very far, it suggests that this type of locomotion may have evolved underwater, before animals were completely adapted to living on land.