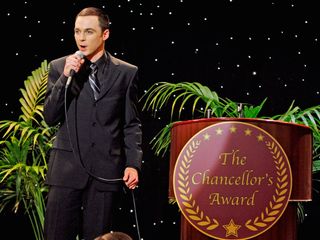 The catchphrase "bazinga" — a zinger commonly uttered by Dr. Sheldon Cooper, a fictional theoretical physicist on the TV show "The Big Bang Theory" — has inspired the creation of a novel compound, according to new research.

The compound, known as BaZnGa (barium, zinc and gallium), may have unorthodox roots (after all, how many compounds exist because of a sitcom wisecrack?), but its creation fits into a goal pursued by countless physicists: to discover new materials, as well as materials with novel properties, said study co-author Paul Canfield, a professor of physics and astronomy at Iowa State University.

"It's part of our effort to try to discover new materials and characterize them," Canfield told Live Science. [Elementary, My Dear: 8 Little-Known Elements]

The idea to create BaZnGa came from study co-author Na Hyun Jo, a graduate student of physics in Canfield's lab. One evening, she turned on the TV and saw a commercial for "The Big Bang Theory" that showed Sheldon's "Bazinga" as the elements barium, zinc and gallium.

It just so happened that Jo and Canfield were already planning to study three-part compounds (known as a ternary) that contained barium and zinc. When Jo saw "BaZnGa" flash on the TV, it seemed to be a message from the universe, telling her, "'Come on guys, add some gallium, see what you can find!'" Canfield said.

The physicists first checked whether anyone else had ever made BaZnGa. The coast was clear, they found: There was no other reported compound containing just these three elements, Canfield said.

So, Canfield, Jo and their colleagues went ahead and made BaZnGa. The results were surprising: the compound forms a new, never-before-seen crystal structure. This finding is useful, because "whenever you find a new structure, it's nice because it gives you further information on how nature arranges atoms," Canfield said.

However, BaZnGa didn't have any other exciting features — at least any that they could find. Rather, it's like other nonmagnetic quasicrystals, the researchers said. (A quasicrystal shares some qualities with crystals, such as having diffraction, but its atoms aren't arranged as regularly as they are in real crystals, Live Science reported previously.)

But Canfield and Jo did find an amusing flip side to their new concoction: Sheldon says "bazinga" when he's attempting to make a jest or jape, so it's almost as if Sheldon is playing a joke on them, Canfield said.

"We were hoping that we would have a title, 'New high-temperature superconductor BaZnGa,'" Canfield said. "Not so."

For instance, "We checked to see if this new compound was quasicrystalline," the researchers wrote in the study — but it wasn't. The same thing happened when the researchers tested it for high-temperature superconductivity, as well as a barrage of other measures.

"In conclusion, Dr. Sheldon Cooper continues to be both a motivation and an enigma," the researchers wrote in the study. "We admire the accuracy of the prediction of BaZnGa, but regret having fallen prey to his legendary wit; BaZnGa!"

The scientists wrote a lighthearted and a serious version of the study. Both are available on ArXiv, a site where research that has yet to be peer-reviewed can be posted.

Canfield plans to present the results at the annual meeting of the American Physical Society in Los Angeles in March 2018, and he hopes that actor Jim Parsons, who plays Sheldon Cooper, or any of "The Big Bang Theory" cast members can attend "and perhaps discuss BaZnGa in the light of our findings," Canfield said.