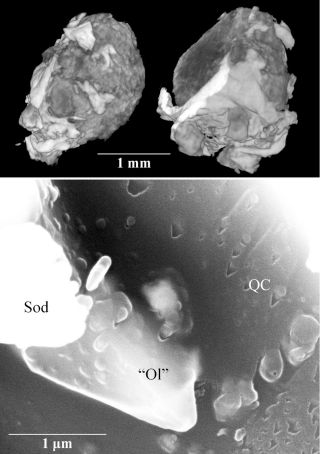 An X-ray tomography image of the whole mineral grain (top) where the quasicrystal was found (shown in a scanning electron micrograph image in the bottom panel).
(Image: © Paul Steinhardt.)

A bizarre crystal-like mineral recently found in a meteorite that crashed to Earth perhaps 15,000 years ago adds more support for the idea that the fragile structure can survive in nature. But how it formed at the beginnings of the solar system is still a mystery.

The newfound mineral is called a "quasicrystal" because it resembles a crystal, but the atoms are not arranged as regularly as they are in real crystals. The quasicrystal hitched a ride to Earth on a meteorite that zipped from space through Earth's atmosphere and crashed to the ground. That process is generally a violent one that heats up the insides of rocks, making the delicate quasicrystal's survival a surprise.

"The difference between crystals and quasicrystals can be visualized by imagining a tiled floor," said according to a statement by Princeton University in a press release. "Tiles that are six-sided hexagons can fit neatly against each other to cover the entire floor. But five-sided pentagons or 10-sided decagons laid next to each will result in gaps between tiles." [Fallen Stars: A Gallery of Famous Meteorites]

This quasicrystal, which has not yet been named, is the second ever found in nature and the first natural decagonal quasicrystal ever found. "When we say decagonal, we mean that you can rotate the sample by one-10th the way around a circle around a certain direction and the atomic arrangement looks the same as before," lead researcher Paul Steinhardt, a Princeton University physicist, told Live Science in an email. "So, each layer has this 10-fold symmetry and then the layers are stacked with equal spacing."

The first natural quasicrystal formed outside of the laboratory, reported by Steinhardt and his colleagues in 2009, is patterned somewhat like a soccer ball, which sports 12 pentagons. "If you rotate about any of these pentagons one-fifth of the way around the circle, it gives you back a pattern identical to the original," Steinhardt said, adding that "there is not equal spacing along any direction." That quasicrystal, called an icosahedrite and made up of metallic copper, aluminum and iron, was confirmed as natural after the research team traveled to the region in 2011 to pick up and analyze additional samples.

Both known quasicrystals originated in the same meteorite collected several years ago in the Koryak Mountains in Chukkotka, Russia, though the new one was embedded in a different grain within that meteorite. In addition, this newfound quasicrystal is made up of nickel, aluminum and iron — an unusual structure in nature, because aluminum binds to oxygen and prevents attachments to nickel and iron atoms.

Now that a second one has been discovered, the researchers are intrigued as to how the quasicrystals could form in a 4.57-billion-year-old meteorite that is about the same age as Earth's solar system.

"The formation of this quasicrystal happens to be linked to the formation of one of the first meteorites to have formed in the solar system. It is telling us that exotic minerals could exist back then, well before there was an Earth and well before most types of minerals we know," Steinhardt wrote. "They would be part of the building blocks of the solar system, including planets and asteroids. Yet, we did not know before now that these quasicrystals were part of that story and we do not understand yet how they formed."

Figuring out how they formed may give scientists insight into "novel processes in the early stages of the solar system that influenced the formation of planets, including the Earth," he added.

The results were published online March 13 in the journal Scientific Reports.