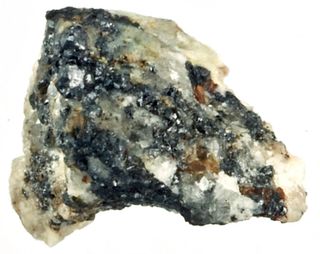 A sample of a bizarre crystal once considered unnatural may have arrived on Earth 15,000 years ago, having hitched a ride on a meteorite, a new study suggests.

The research strengthens the evidence that this strange "quasicrystal" is extraterrestrial in origin.

The pattern of atoms in a quasicrystal falls short of the perfectly regular arrangement found in crystals. Until January, all known quasicrystals were man-made. "Many thought it had to be that way, because they thought quasicrystals are too delicate, too prone to crystallization, to form naturally," study researcher Paul Steinhardt of Princeton University told LiveScience at the time.

Then researchers announced the presence of a natural quasicrystal in a meteorite found in the Koryak Mountains of Russia. . That meteorite was being kept in a museum in Italy. Now, on an expedition to the site where it was found in Russia, Steinhardt and his colleagues now have found more natural samples of quasicrystals for analysis. [Gallery: Microscopic Beauty Found In Rocks]

Steinhardt and his colleagues were long on the hunt for natural quasicrystals. They first saw one in 2008, when Italian mineralogist Luca Bindi of the Museum of Natural History in Florence spotted a tiny quasicrystal grain in a rock sample in the museum's collection.

The researchers reported that find in the journal Science in 2009 and then traced the rock to Russia. An analysis of the rock fragment, published in January in the journal Proceedings of the National Academy of Sciences, concluded that the rock was a meteorite that likely formed in the early solar system more than 4.5 billion years ago, before the Earth existed.

The hunt for quasicrystals

Now Steinhardt and Bindi report in the journal Reports on Progress in Physics that quasicrystal samples are found in an environment that would not have had the extremes needed to create them. The report strengthens the case that the sample rode to Earth on a meteorite.

On their expedition to the Koryak Mountains, the researchers also determined that the samples came to Earth during the last glacial period, about 15,000 years ago.

"The fact that the expedition found more material in the same location that we had spent years to track down is a tremendous confirmation of the whole story, which is significant since the meteorite is of great interest because of its extraordinary age and contents," Steinhardt said in a statement.

The next goal, Steinhardt said, is to figure out the secret of the natural quasicrystals' formation.

"What does nature know that we don't?" he said. "How did the quasicrystal form so perfectly inside a complex meteorite when we normally have to work hard in the laboratory to get anything as perfect? What other new phases can we find in this meteorite, and what can they tell us about the early solar system?"

"At the moment, we are at the tip of the iceberg," Steinhardt added.