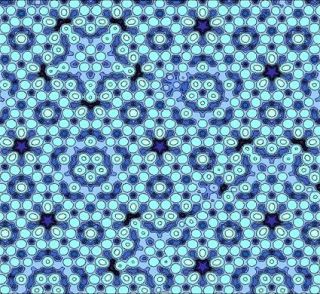 Quasicrystals, like the Silver-Aluminum one shown here, have regular patterns that follow mathematical rules but they don't repeat themselves.
(Image: © AMES Lab, U.S. DOE)

A discovery that won him this year's Nobel Prize in Chemistry also got Dan Shechtman booted from his research group.

The atom-shaking finding? On the morning of April 8, 1982, Shechtman, now at the Israel Institute of Technology, Haifa, observed through an electron microscope an image that seemed to break the laws of nature. In all solid matter, atoms were thought to be packed inside crystals in symmetrical patterns that were repeated periodically over and over again.

The image Shechtman observed, however, showed that the atoms in his crystal were packed in a pattern that couldn't be repeated, and was thought as impossible as, say, creating a football using only six-cornered polygons, when a sphere needs both five- and six-cornered polygons. Shechtman had discovered what are called quasicrystals, an atomic-level version of the mosaics of the Arabic world, in which regular patterns that follow mathematical rules never repeat themselves.

Over the course of defending his controversial quasicrystal findings, he was asked to leave his research group. Even so, his discovery and ensuing battle led scientists to reconsider their conception of the very nature of matter.