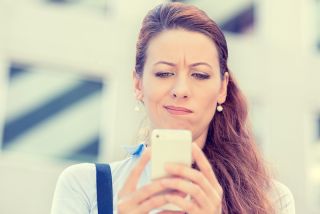 A new smartphone app has been approved for people to use as a type of contraception in the European Union, but experts warn that you shouldn't toss out the condoms and birth control pills just yet.

The app, Natural Cycles, is available in the Apple App Store and the Google Play store to users everywhere. It digitizes an age-old method of preventing pregnancy, sometimes called the rhythm method, natural family planning or fertility awareness. The idea is to track ovulation and avoid sex (or use additional protection) on days when a woman is most likely to be fertile. But these methods have a failure rate of about 25 percent, even though the promotional materials for Natural Cycles claim that the app is 93 percent effective. [Wonder Woman: 10 Interesting Facts About the Female Body]

"Don't rely on something like this," said Dr. Mary Jane Minkin, a professor of obstetrics, gynecology and reproductive sciences at the Yale School of Medicine who is not involved with the company that makes the app. The app could be an option if a couple wanted to postpone pregnancy for a while but would not mind it if they did become pregnant, she said. But most people who are looking for contraception are going to want something more reliable.

An app for family planning

The company that makes Natural Cycles is headquartered in Sweden, and the app was certified as a medical device in February, making it the only app that can call itself "contraception" in Europe. The app requires users to enter a precise body-temperature measurement first thing every morning — a familiar task for people who are already using natural family planning methods, as resting body temperature rises by a miniscule amount right at ovulation. The app then tracks body temperature and the menstrual cycle, taking into account the amount of time that sperm are likely to survive in the body, to give "red" days on which the chance of fertilization is high and "green" days on which it is lower.

It's essentially just the tech-age way of doing natural family planning, "which has been around for generations," said Dr. Nathaniel DeNicola, an assistant professor of obstetrics and gynecology at The George Washington University's School of Medicine & Health Sciences. DeNicola is not involved with the company that makes the app.

But the success rate that Natural Cycles touts seems unrealistically high, and it comes from just two clinical studies, DeNicola said. Research on other methods of contraception — including condoms, birth control pills and intrauterine devices (IUDs) — goes back decades, so the success rates are pretty clear. That's not true of this app, DeNicola said.

In one study, a clinical study published in March 2016, the app's makers found that it had a failure rate of just 0.5 percent — it accidentally gave users a green "go ahead" sign that unprotected sex would be OK on days when it should have given a red "no-go" sign only 0.5 percent of the time. In other words, out of 1,000 women using the app, 5 could expect to become pregnant due to the app's algorithm failure.

This failure rate is on a par with that of one of the most reliable reversible birth control methods out there, the IUD, DeNicola said. However, that rate is the app's "perfect use rate," meaning it applies only to people who use the app perfectly, following the directions to the letter every day, DeNicola said.

The perfect-use rate is "probably the last number that should be out there, because the data really isn't close to supporting that" for typical users, DeNicola said. [7 Surprising Facts About the Pill]

Another estimate of the app's failure rate is called the "typical use" rate, and pegs the risk of an unintended pregnancy at 7 percent. But that number is based on a single study in which a third of the people enrolled dropped out before the end. The company-affiliated researchers did a more conservative calculation by assuming all of those dropouts got pregnant, and came to a failure rate of 10 percent.

"That would probably be the most medically sound number to be talking about, if you felt comfortable giving a number at all based on just one study," DeNicola said.

Whether Natural Cycles would be a good choice depends on the user's needs and expectations for their birth control, Minkin said. If the 25 percent chance of pregnancy that normally comes with the natural family planning method seems acceptable, then the app is "certainly better than nothing," she said.

But anyone hoping for a more reliable method should not go in thinking that Natural Cycles, or any fertility awareness app, will give them a 99.5 percent chance of not getting pregnant, DeNicola said. For rates like that, people would be better off using long-acting reversible contraceptives, or LARCs. These include options such as the birth control implant that goes under the skin (99 percent effective, according to Planned Parenthood) and IUDs (99 percent effective).

At present, health and medicine apps are largely unregulated in the United States, said DeNicola, who is the vice chair of the American Congress of Obstetricians and Gynecologists' task force on telehealth. That means that the safety and efficacy of health apps are often "buyer beware."

"We should be using this new technology," DeNicola said, "but using it carefully."