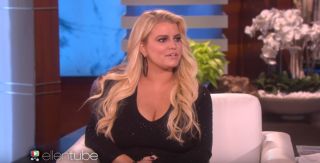 Jessica Simpson appearing on The Ellen DeGeneres Show on May 22.
(Image: © YouTube Screengrab/TheEllenShow)

Jessica Simpson isn't planning to have more children anytime soon — the singer and mother of two recently revealed that she has an intrauterine device (IUD).

While appearing on The Ellen DeGeneres Show today (May 22), Simpson — who was on the show twice previously while pregnant — announced that this time, she is not with child.

"I'm not pregnant on your show," Simpson told DeGeneres. "We got an IUD … Nothing's going to get in that uterus," Simpson said. Simpson has a 5-year-old daughter and a 3-year-old son. "I have two beautiful children, and I'm not having a third," said Simpson, who is 36 and married to former professional football player Eric Johnson. [11 Big Fat Pregnancy Myths]

An IUD is a type of long-acting, reversible contraception that is inserted by a doctor into the uterus to prevent pregnancy. Here are some important facts to know about IUDs:

It's one of the most effective forms of birth control.

IUDs are the most effective form of reversible birth control, along with birth control implants. According to the American Congress of Obstetricians and Gynecologists, IUDs have a failure rate of less than 1 percent during the first year of typical use. That's about the same rate as sterilization procedures such as "tube tying," according to the ACOG.

There are two types of IUD.

IUDs fall into two broad categories: hormonal IUDs (including Mirena, Kyleena, Skyla and Liletta), and copper IUDs (including ParaGard). Both types prevent sperm from fertilizing an egg cell. Hormonal IUDs work by releasing small amounts of the hormones that thicken cervical mucus, which prevents sperm from reaching an egg and may also prevent ovulation, or the release of an egg from the ovaries, according to Planned Parenthood. Copper IUDs release copper ions that are toxic to sperm, meaning they damage sperm and prevent fertilization, according to the Mayo Clinic.

It can prevent pregnancy for a decade or more.

The copper IUDParaGard is approved for preventing pregnancy for up to 10 years. But studies show that it may be effective for up to 12 years, according to Bedsider, an online birth control support network operated by The National Campaign to Prevent Teen and Unplanned Pregnancy, a nonprofit organization.

Hormonal IUDs also work for years, although not as long as copper IUDs. Mirena works for up to six years, Kyleena works for up to five years, and Skyla and Liletta work for up to three years, according to Planned Parenthood. (Any IUD may be removed sooner than its expiration date this if a woman wants to become pregnant.)

But pregnancy is not impossible.

In rare cases, women can become pregnant when they have an IUD. For example, earlier this month, it wasreported that a woman in Alabama became pregnant while she had an IUD. The story gained a lot of attention when a photo of her baby holding the failed device appeared on social media. A woman could become pregnant if her IUD slips partly or completely out of the uterus, or if it becomes embedded in the wall of the uterus.

Still, it's very uncommon for a woman who has an IUD to become pregnant. For example, in studies by Mirena, fewer than eight out of 1,000 women (0.8 percent) became pregnant over five years while using the device.

Most women can get one, but some shouldn't.

For most women, it's safe to get an IUD, according to the ACOG. But some women have conditions that make it unsafe for them to get an IUD. Women should not get an IUD if they are pregnant, have a sexually transmitted disease or a pelvic infection, have cervical cancer or cancer of the uterus, have unexplained vaginal bleeding outside of their period, or have had breast cancer, according to Planned Parenthood.

Women should not get a copper IUD if they have a copper allergy or if they have a condition called Wilson's disease, which causes copper to accumulate in the liver. In rare cases, the size or shape of a woman's uterus may make it harder to insert the device correctly, according to Planned Parenthood.

You can get pregnant when it's taken out.

IUDs are a reversible form of contraception, which means they don't affect fertility after you stop using them. According to Planned Parenthood, a woman's fertility goes back to normal right after the device is removed, so it's possible to get pregnant soon after it is taken out. [Conception Misconceptions: 7 Fertility Myths Debunked]

In a study by Mirena, about 80 percent of women who wanted to become pregnant were able to conceive within 12 months of having the device removed. (All of the women in the study had previously had a child before they had the device inserted.)

It also works as emergency contraception.

The copper IUD ParaGard also works as a form of emergency contraception, which prevents pregnancy after unprotected sex. If an IUD is inserted within five days of unprotected sex, it is more than 99.9 percent effective at preventing pregnancy, according to Planned Parenthood.