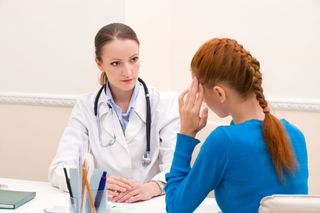 Female doctors and nurses whose specialty is family planning are seven times more likely than women in the general population to use intrauterine devices (IUDs) for their own contraception, a new study suggests.

Researchers surveyed about 550 female family planning providers — such as obstetricians, gynecologists, midwives and nurses — and asked whether they used contraception, and what type they used. Study authors then compared these results with a 2006 to 2010 survey of U.S. women who were about the same age.

Out of the 335 family planning providers who used contraception, 42 percent used a long-acting method of birth control, including IUDs and implants, whereas 6 percent of women in the general population used one of these methods.

"We are, theoretically, the most educated group of people in this arena," said study researcher Dr. Ashlesha Patel, system director of family planning at Cook County Health & Hospital System in Chicago, referring to family planning providers. "And given that background ... we take the most effective methods" of birth control, Patel said. [Birth Control Quiz: Test Your Contraception Knowledge]

IUDs and implants are among the most effective forms of birth control. Less than 1 percent of women who use these methods will become pregnant each year, according to the Centers for Disease Control and Prevention.

Birth control pills are less effective because people don't always take them as directed, Patel said. For example, some women might not take the pill every day, as is required for the medication to be most effective. Among typical users of birth control pills, about 9 percent will become pregnant each year, the CDC says.

And condomsare even less effective in real-life use: About 18 percent of typical condom users become pregnant each year.

And although the Affordable Care Act covers long-acting birth control, in reality, that coverage isn't in place yet for all women, Patel said. So cost may still be a barrier for some. If not covered by insurance, an IUD costs between $500 and $1,000, according to Planned Parenthood.

Still, future studies are needed to confirm the findings, because the survey may not be representative of all female family providers, Rabinsaid.

This finding "speaks to the need for greater educational effort and the reduction of the barrier of costs in so far as possible, if we are serious about reducing the rate of unintended pregnancy," Rabin said.

The new study was presented in April at the meeting of the American College of Obstetricians and Gynecologists, and has not yet been published in a peer-reviewed journal. The study was funded by Teva pharmaceuticals and Bayer HealthCare, which both make long-acting methods of birth control.

A 2012 poll of just female obstetricians and gynecologists found similar results, showing that these doctors are three times more likely than the general public to use IUDs.