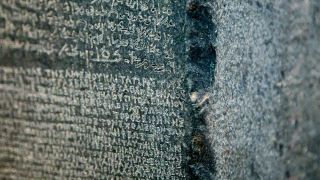 The Rosetta Stone has been on display at the British Museum since 1802.
(Image: © Vladimir Korostyshevskiy/Shutterstock)

The stone, now known as the Rosetta Stone, would be the key to deciphering Egyptian hieroglyphs. It would also land a place in the English language: Today, a search in a scientific journal database for "Rosetta Stone" yields many more metaphorical uses of the term than actual research on the Egyptian artifact. Topics ranging from medical imaging, to black holes, to "intensional dynamic programming" (it's an algorithm thing) have been described as a "Rosetta Stone" by hopeful researchers looking for a breakthrough. [Cracking Codes: 5 Ancient Languages Yet to Be Deciphered]

So what made the Rosetta Stone so special? It wasn't the message it contained. According to the British Museum collections page, the find was part of a larger slab carved with a decree passed by a priestly council affirming Ptolemy V's success as a ruler in 196 B.C., the first anniversary of his coronation. Rather, what made the stone important was how this decree was written: first in Egyptian hieroglyphs; then in demotic, another Egyptian script; and finally, again in ancient Greek.

The repeated texts allowed Jean-François Champollion, a French scholar, to decode the hieroglyphs in 1822, opening up masses of ancient Egyptian texts for study. Contrary to the metaphors of Rosetta Stones as keys to a sudden breakthrough, though, this was a painstaking process that took nearly 20 years.

Here's how it happened.

The discoverer of the Rosetta Stone was a French military officer, Pierre François Xavier Bouchard, who spotted it while he and his men were demolishing a wall to extend Fort Julien in Rosetta, a port city now known as Rashid. The troops were part of Napoleon's Egyptian campaign, in which he (temporarily) conquered the country — and brought a bevy of scientists along who were eager to study what was to them unfamiliar land.

The Rosetta Stone was one of the most important discoveries of the three-year campaign, and its ownership would become one of the key issues in the war. The soldiers who discovered the stone quickly reported it to Napoleon's scientific personnel in Cairo, according to "Cracking Codes: The Rosetta Stone and Decipherment" (University of California Press, 1999). Immediately, the scientific community recognized the potential of the stone as a key to cracking the code of hieroglyphic writing. [Photos: 5,000-Year-Old Hieroglyphs Discovered in Sinai Desert]

As the French campaign in Egypt started to crumble — the British sent troops to push back as they tried to protect their own influence in the region — the possession of Egyptian antiquities became a sticking point between the two colonial powers. In 1801, French Gen. Jacques-Francois de Menou held out in Alexandria and claimed that the Rosetta Stone was his personal property, in an attempt to ensure it remained in French hands, according to "Cracking Codes." There were threats and rumors that the French might destroy the antiquities rather than hand them over to the British.

Ultimately, the handover of the stone and other antiquities was negotiated between the British and the French, and by the terms of the Capitulation of Alexandria, the agreement that ended the French campaign, the Rosetta Stone ended up in British hands. It landed in England in February 1802 and became part of the British Museum's collection that June.

Greek was known to be the administrative language of the Ptolemaic period, while demotic was used for daily writing and hieroglyphics were used for priestly missives. Thus, scholars were confident from the start that the stone would turn out to convey the same information in three different scripts. The first task they faced while studying the Rosetta Stone was to decipher the demotic script; only the ancient Greek was translatable at the time. In 1802, Swedish researcher J.H. Akerblad published a paper in which he unraveled a few of the demotic words by comparing them to the modern Coptic language. English scientist Thomas Young slowly started to crack some of the code between 1814 and 1818 (he did this on his summer vacations, according to "Cracking Codes") and was able to decipher Ptolemy's name. He was also able to infer the meanings of some of the hieroglyphs, though he could not understand how the script worked in a broader sense.

At the time, Egyptologists thought that each hieroglyph represented a single word. In fact, as the decipherment of the Rosetta Stone would eventually reveal, some hieroglyphs represent words or ideas, while others represent consonant sounds. Some symbols do both, and whether they should be read as a word or a sound depends on the context.

The breakthrough would come through Champollion, who was only 9 years old when the stone was first discovered. Champollion started publishing papers on ancient Egyptian linguistics when he was just 16, according to "Cracking Codes."

In 1814, according to the book, Champollion wrote to The Royal Society of England, asking for a cast of the stone, as he was working off of a printed engraving that didn't show the writing clearly. (He didn't get it, as the French and English were not on particularly good diplomatic terms at the time.)

Nevertheless, Champollion kept working on the problem. He didn't just use the Rosetta Stone; he also collected snippets of text from colleagues. Slowly, using the cartouches (royal names) on the Rosetta Stone and these other texts, he began to unravel that hieroglyphs were a mixture of two elements: symbols conveying words, and symbols conveying sounds. His nephew, Aime Champollion-Figeac, claimed that, the day Champollion made his breakthrough, he ran into his brother's office, cried "I've done it" and fainted dead away, according to "Cracking Codes." According to this tale, he remained unconscious for five days.

Champollion's discovery remained subject to scientific bickering and controversy until a much less famous stone proved him right in 1866, according to "Cracking Codes." Another decree — also written in hieroglyphic text, Greek and demotic — was found in Tanis, Egypt, and was studied by Prussian Egyptologist Karl Richard Lepsius that year. The Tanis Stone gave scientists a comparison for testing the Rosetta Stone translation and confirmed Champollion's findings. It is now kept in the Egyptian Museum in Cairo.

The Rosetta Stone itself remains at the British Museum, where it is a popular tourist draw but no longer the subject of much research. Egyptian authorities periodically call for the return of the stone.

"[T]he artifacts stolen from Egypt must come back," Zahi Hawass, then-director of the Supreme Council of Antiquities, said in 2003. Hawass continued to call for the stone's repatriation to Egypt until he lost his position in the Egyptian government in 2011 amid the upheaval of the country's revolution that year. His successors have taken up the cause, with Egyptian archaeologist Ahmed Saleh calling for the return of the stone as recently as 2014. The British Museum has refused these calls, citing a 1970 UNESCO agreement that denies Egypt the right to demand any artifact taken from the country before 1970, according to the Cairo Post. Recently smuggled artifacts are regularly repatriated to Egypt, but objects taken during the colonial period have proved more difficult for Egypt to reclaim.