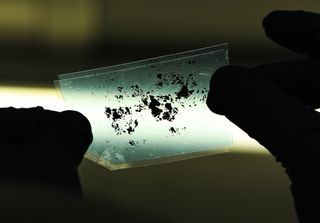 The new anti-counterfeiting method has two components: a unique molecular pattern that can be incorporated into a holographic label and a smartphone app.
(Image: © Lancaster University)

In the sophisticated world of counterfeiting, it can often be difficult to tell fakes from the real deal. But now, scientists have developed a new method that can stamp things with "atomic fingerprints" to keep phony products at bay.

"There is no bigger crime than counterfeit crime," said Robert Young, a professor of physics at Lancaster University in the United Kingdom and chief technology officer of the tech startup Quantum Base. [Faux Real: A Gallery of Forgeries]

Earlier this month, Young and his colleagues announced a relatively simple technique for confirming the authenticity of an object — an advance that could put a dent in the counterfeit industry, where fakes, forgeries and imitations cost the global economy half a trillion dollars in lost revenue each year, according to the most recent data from the Organization for Economic Co-operation and Development, headquartered in Paris.

The new anti-counterfeiting method, published online in ArXiv, the open-access preprint journal from Cornell University, has two components: a unique molecular pattern that can be incorporated into a holographic label and a smartphone app.

The unique pattern is created by intentionally fabricating flaws into an atom-thin layer of material, such as graphene oxide. Flaws may include removing a carbon atom, or adding extra oxygen atoms, or creating a ridge of atoms, according to the researchers. Once the flaw is set, the material is incorporated into an ink and then, using an inkjet printer, printed onto a hologram, which can be added as a label to any product.

To confirm the presence of the atomic pattern, a person would use a smartphone camera and its built-in flash to photograph the label. The flash excites the atoms, which produce a unique color based on the pattern. A corresponding app can instantly analyze the image and confirm whether the label is authentic or not, the researchers said.

"I'm really satisfied by how simple it is," Young told Live Science.

Solving such an extensive problem like counterfeiting requires a solution that can be adopted by a large number of people, Young added. A technique that's easy to incorporate and easy to analyze could ensure that it's widely adopted much faster, he said.

Young and his team are working with a company that prints 10 billion holograms per year and said that the first application could be in the automotive industry, where parts are already spray-painted with labels. By piggybacking onto existing manufacturing applications, the researchers can prove that the method works, according to Young.

"We're expecting the first products in market in the first quarter of next year, in 2018," he said.

From there, the researchers would like to branch out to other industries, including pharmaceuticals, where $200 billion a year is lost from counterfeit drugs, Young said. And what's worse, this illegal medicine can sometimes lead to death.

"Thirty percent of counterfeit pharmaceuticals don't contain the correct active ingredient," Young said. "People buy these things, believe they're real, but they're not being treated for the disease."

Young said that eventually, the atomic fingerprints his team has developed could be laminated directly onto individual pills.

"This is genuinely a really exciting application," he said.