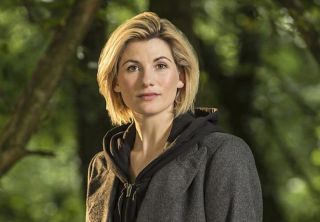 Jodie Whittaker, the 13th Doctor, is the first woman in the title role for "Doctor Who," which launched more than half a century ago.
(Image: © Copyright BBC/Photographer Colin Hutton)

The Doctor is in — sci-fi television series "Doctor Who" has a new Doctor, and for the first time in the show's history, she's a woman.

Since the long-running program debuted in 1963, 12 actors have held the leading role of the Doctor, a Time Lord from the planet Gallifrey. As a regenerating extraterrestrial, the Doctor has returned from the point of death 11 times, each time with a different body and personality (and with a taste for uniquely eccentric wardrobe choices). But for over 50 years, every regenerated Doctor was steadfastly male.

That changed yesterday (July 16), when BBC One announced the identity of the 13th Doctor, to be played by British actress Jodie Whittaker ("Broadchurch" and "Black Mirror"). She replaces actor Peter Capaldi, who joined the show as the 12th Doctor in 2013, and who will be departing at Christmas, BBC representatives said in a statement. ['Doctor Who' Scientists: How Do Women Measure Up?]

BBC broke the news with a 1-minute trailer that appeared on social media and aired on BBC One after the televised men's Wimbledon final. It featured a mysterious, hooded figure walking through a forest, eventually reaching the TARDIS —the Doctor's signature blue phone box that travels through time and space — and lowering a hood to reveal her face.

The decision to cast a woman as the 13th Doctor originated with the show's new head writer and executive producer Chris Chibnall, who "always knew" that he would make the next Doctor a woman, he said in the statement.

Story lines within "Doctor Who" had previously suggested that it was certainly possible for a Time Lord to regenerate as either male or female. In the 2010 episode "The End of Time: Part Two," the newly regenerated 11th Doctor (Matt Smith) first mistakes himself for a woman. And in the 2011 episode "The Doctor's Wife," the Doctor reminisces about a fellow Time Lord known as the Corsair, who was often male, but who was also "a very bad girl" when female.

More recently, the currently recurring "Doctor Who" character Missy (Michelle Gomez), who first appeared in 2014 in the episode "Deep Breath," also as a Time Lord, is the latest incarnation of the Doctor's oldest friend and adversary, previously a male Time Lord called the Master.

However, not all "Doctor Who" fans were overjoyed with the show's new direction. On YouTube, the trailer has to date received nearly 9,000 likes and about 5,000 dislikes; though some commenters declared that it was it "an interesting experiment" and argued that having an actress in the role "would invigorate the show," others pronounced the program "officially ruined," saying that this was "the worst thing the BBC could have done," and that "the BBC is shoving equality down our throats."

The BBC isn't alone in overcoming resistance to diverse representation in leading roles — in the United States, experts are scrutinizing the entertainment industry for dragging its heels when it comes to casting diversity and inclusion. And women still have a long way to go before they are featured with the same frequency as men, according to a report published February 2016 by the Institute for Diversity and Empowerment at Annenberg (IDEA) at the University of Southern California.

The authors investigated representations of men and women in U.S. films released in 2014, and in U.S. television and digital series that debuted between Sept. 1, 2014, and Aug. 31, 2015, they wrote in the report.

Overall, gender ratios in film and TV skewed heavily male — only 18 percent of the evaluated media had roughly equal representation of male and female characters, according to the study. The researchers also found that only 30 percent of all speaking roles in films were filled by female characters, while in scripted series, girls and women represented less than 40 percent of all parts with dialogue. Women played leading roles in 42 percent of TV and digital programs, but lagged far behind in films, where they appeared in leading roles only 27 percent of the time.

For a time-honored and beloved show like "Doctor Who," casting the Doctor as a woman sends an important message about how even iconic characters aren't off-limits to actors who might not have been considered to play them in the past, Whittaker said in the BBC statement.

"This is a really exciting time, and 'Doctor Who' represents everything that's exciting about change," Whittaker said. "The fans have lived through so many changes, and this is only a new, different one, not a fearful one."