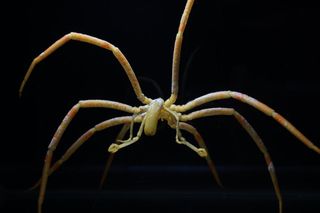 Sea spiders pass oxygen to their extremities via their gut fluids, rather than the substance they have in lieu of blood called hemolymph.
(Image: © Timothy R. Dwyer (PolarTREC 2016)/ARCUS)

Imagine if instead of blood vessels, intestines snaked through your limbs. And then picture that through these intestines coursed not only this morning’s breakfast in a slosh of digestive juices but another unlikely component: oxygen.

This appears to be the case for sea spiders, according to a new study. The creatures pass oxygen to their extremities via their gut fluids, rather than the substance they have in lieu of blood called hemolymph.

While it’s strange that sea spiders — whose bodies are dominated by long, spindly legs punctuated by a tiny head and trunk — take oxygen into their bodies through pores in their outer layer, "their guts are just bizarre," said the study’s lead author Art Woods, a professor of ecology and evolutionary biology at the University of Montana. [Weird and Wonderful: 9 Bizarre Spiders]

Woods first noticed something was unusual about sea spider guts when observing them thorough a microscope, trying to trace the path of gut fluids and hemolymph. The key was in observing the creatures’ peristalsis, the waves of motion that push gut fluids through the gut tubes similar to how food makes its way down our esophagus and through our intestines.

"It gradually dawned on me that the peristalsis that the gut tubes were doing could not possibly be just for digestion. It had to be for something else because it was so organized and so vigorous," Woods told Live Science.

To find out the true purpose of the waving gut motion, he and his team observed the heartbeat and gut peristalsis of 12 sea spider species from temperate and Antarctic regions. They found that while the spiders do have pumping hearts, the hemolymph they pump circulates only around the center of their bodies — to the head, trunk and the uppermost parts of the legs.

"So the question is, why aren't these hearts doing the job they normally do in all the other organisms that we know about? It's like they've offloaded the circulatory function onto the gut and the heart has this very restricted function right in the middle of the body," Woods said.

He thinks the answer might have to do with conserving energy.

If the oxygen were to be transported through hemolymph, the heart would have to pump the liquid all the way from the center of the spiders' bodies through their long legs to their very tips. A lot of energy would be dissipated along the way, he explained. This isn't the case for gut peristalsis. Because the waves that pass along the gut occur right near the liquid they push, little energy is lost along the way, leaving more energy for propelling the liquid along.

Woods likens the heart to a gas generator connected by a long extension cord to a house 20 miles (32 kilometers) away. The gut is like a generator located right inside the house.

"It may not be super-organized movement," Woods said, referring to gut peristalsis. "It may not be this spectacular evolved four-chambered pump that's sending blood through this super-elaborate set of blood vessels, but it gets the job done in a local way that probably really saves them energy."

Sea spiders may not be alone in this oddball solution. Although it remains to be seen, it could be that other creatures with similar branching gut structures, such as a type of blind crustacean, transport oxygen through their guts as well.

The new study was published online July 10 in the journal Current Biology.