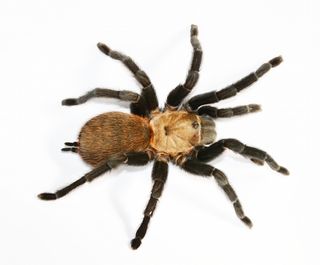 Tarantulas may run faster in hot temperatures, but they also have decreased coordination.
(Image: © I.G. Ros)

The tarantula is a fast-moving spider, but it's not always a coordinated one, a new study finds. As the arachnid increases its speed, it also loses some of its coordination, becoming a "little wonky," researchers said.

Spiders have developed a unique way to move around: Rather than relying mainly on muscles to move, they use a fluid called hemolymph, which is their blood. When hemolymph flows into their tubelike legs, the limbs extend and their flexor muscles bend the legs at the joint, causing that fluid to flow back out.

Temperature can change the thickness, or viscosity, of hemolymph, said the study's senior author, Anna Ahn, an associate professor of biology at Harvey Mudd College in California. [Photos: The World's Creepiest Spiders]

"I always tell people, 'I can convince you that spiders are cool,'" Ahn said.

The researchers studied eight adult Texas brown tarantulas (Aphonopelma hentzi). They tested the spiders' speed and agility at four different temperatures: 59, 75, 88 and 104 degrees Fahrenheit (15, 24, 31 and 40 degrees Celsius). When the spiders were placed in temperatures that were higher or lower than that range, they tended to turn around and get into an attack stance, Ahn said.

Spiders have two joints along each leg, and the one closest to the body typically extends first when they're walking or running. To calculate each spider's coordination, the team painted a white dot on each of the joints on a foreleg and hind leg, and compared the angle of the two joints on each leg. Then they filmed the spiders scuttling down a runway.

"They're actually a little skittish and shy," she said. "All you had to do was blow a puff of air on them and they would run away from you."

But it would be difficult to catch the tarantula's unsteadiness with the naked eye. They move fast, and the researchers had to slow down the video in order to calculate the angle of each leg. Regardless, the spiders' instability at high temperatures may explain why some tarantulas emerge at dusk, when the weather is cooler, Ahn said.

The finding extends beyond the world of spiders, and may help engineers who study hydraulic robots, Ahn said.

"Hydraulic extension has its limitations," she said. "And the limitations happen at the faster speeds, rather than the higher fluid viscosities."

The study was published online today (April 1) in The Journal of Experimental Biology.