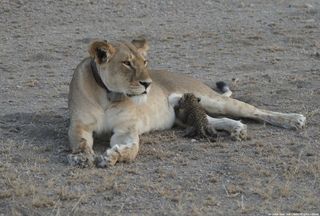 Lions and leopards normally don't get along, but one wild lioness — recently spotted nursing a leopard cub in Tanzania's Ngorongoro Conservation Area — apparently didn't get that memo.

"It's unprecedented," said Luke Hunter, president and chief conservation officer of Panthera, a global wild cat conservation nonprofit based in New York City. "It's the first case of any big cat in the wild suckling a cub of another species."

It's a mystery how the 5-year-old lioness encountered the approximately 3-week-old leopard. But because the lioness has a litter of cubs that are about the same age as the leopard, it's possible that her maternal instincts kicked in, prompting her to nurse the furry babe instead of kill it, Hunter said. [See Photos of the Lioness Nursing the Leopard Cub]

A guest at the Ndutu Lodge in the Ngorongoro Conservation Area took the photos Tuesday (July 11). The guest alerted KopeLion, a nongovernmental organization that works to promote lion and human coexistence and tags lions with radio collars to track them (including the nursing lioness, known as Nosikitok).

KopeLion works with Panthera, so representatives from the organization emailed the "genuinely unique" photos to the nonprofit to spread the news, Hunter told Live Science.

While people may see the lioness's maternal gesture as adorable, the future of this leopard cub is dangerously uncertain, Hunter said. Lionesses have their litters in seclusion, away from the pride. So, technically, Nosikitok could bring the leopard cub back to her litter and raise it with her offspring. Leopards and lions diverged about 2.5 million years ago, but they still have similar milk and nursing periods, Hunter said.

However, after about eight weeks, lionesses bring their cubs to the pride, and then raise them communally with the other adults. If the leopard cub makes it this far and is introduced to the pride, that meeting could be its last, Hunter said.

"It would be unlikely that the rest of the pride would accept it," Hunter said. "You never know, because up until this week, I would have said this doesn't happen. You can never predict, can you? But it seems really unlikely."

As of Thursday evening (July 13), the lioness had caught up with some other adult members of her pride, but it's unclear where the leopard cub has gone. "We're holding our breath to see what's going to happen with this," Hunter said.

In the best-case scenario, the leopard's mother would emerge and reclaim her cub.

"I'm hoping that its mum is still around and retrieves it, and we all go back to normal," Hunter said. "That would be its greatest chance for its survival. But we'll just wait and see; we're not sure what's going to happen."

"Very occasionally, we do record that," Hunter said. "But again, it's strictly within the same species, not across these species' lines. [This new case] is really, really unusual."