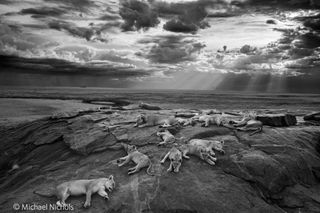 An award-winning photo of five lionesses and their cubs shows the pride just after the females fought off one of the males in the group.
(Image: © Michael ‘Nick’ Nichols / Wildlife Photographer of the Year 2014)

A stunning black-and-white photo of five lionesses relaxing with their cubs in Tanzania's Serengeti National Park has taken the top prize at the 50th Wildlife Photographer of the Year competition, held this week at London's Natural History Museum.

The image, snapped by American photographer Michael Nichols, shows the Vumbi pride resting on a kopje, or rocky formation, as the late afternoon sun beams on the expansive plains of the Serengeti. The photo expresses the essence of the lions as people typically visualize them — basking in nature, away from the threat of human activity, Nichols said in a statement.

On Tuesday (Oct. 21), a panel of international judges awarded first place to Nichols' photo, which he dubbed "the last great picture." Nichols' entry edged out more than 42,000 photos submitted from 96 countries. [See more photos from the Wildlife Photographer of the Year competition]

To capture the incredible scene, Nichols quietly followed the pride for almost six months, until the lions were used to his presence. Before he took the picture, the lionesses had attacked and driven off one of the two males in the pride. Then, with their cubs, they took a catnap in the sun.

Nichols photographed the group from his vehicle — he had cut a hole in its roof — and shot it in infrared because it "transforms the light and turns the moment into something primal, biblical almost," he said.

A few months after he took the picture, Nichols received news that three of the female lions had been killed after the pack had left the safe confines of the park.

Carlos Perez Naval, age 8, won the Young Wildlife Photographer of the Year 2014 award for his picture of a scorpion sunbathing near his hometown in northeastern Spain. A double exposure allowed him to overlay the sun in the top-left corner.

These photos, as well as other award-winning images, will be on display at the Natural History Museum in London from Oct. 24 through Aug. 30, 2015. The exhibition will also travel to six continents, giving millions of people the chance to see the spectacular images.