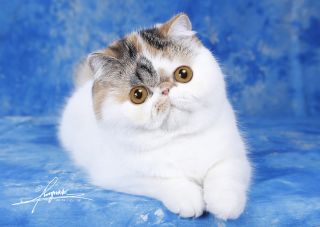 Outstanding examples of pussycat pulchritude — with coats representing a range of hues in stripes, patches and solid patterns — were recently recognized on July 1 during a ceremony held by the Cat Fanciers' Association in Chicago to honor the year's "Top Cats."

Some champions sported cloud-like coverings of fur, while others had no fur at all. Their eyes were saucer-like or almond-shaped, and their ears were tiny and perky, or swooping and bat-like, or folded close to their heads.

While these feline champions didn't resemble one another in the slightest, each winner was chosen as the best representative of its breed. But what are the features that define cat breeds, and what traits signify which individuals are championship material? [Photos: Champion Cats are Show-Stopping Stunners]

The Cat Fanciers' Association (CFA) currently recognizes 42 cat breeds. These range from breeds that even casual cat lovers would recognize, such as Siamese, Persian and Maine coon, to the lesser-known LaPerm, Burmilla and ragamuffin. All cat breeds belong to the same species: Felis catus, or domestic cat. But generations of selective breeding produced combinations of traits that are specific to certain lineages of cats, which are then recognized as "breeds" by organizations such as the CFA.

The CFA categorizes these traits to develop universal standards for distinguishing among breeds and for judging individual animals in competitions, said Teresa Keiger, a CFA all-breed judge.

"Every breed has a standard that describes the perfect example of that breed," Keiger told Live Science. "It describes the breed in terms of body characteristics — body length, tail length, head shape and profile, coat color, texture and length — and then any other attribute that's unique to the breed."

For example, the sphynx, a hairless breed, is a lineage that originated from a kitten born in 1966 with a genetic mutation for hairlessness, the CFA said in a breed description. Though the breed gives the appearance of being bald, all of these cats have some hair on their nose and ears, and some have a downy coat that makes the cat feel like "a warm peach" to the touch, according to the CFA.

CFA breed standards require that sphynx cats have eyes that are large, "lemon-shaped" and wide-set, with a minimum distance of one eye length between them. Ears must be "large to very large," and the body should be well muscled, with back legs that are a bit longer than the front legs, according to the CFA.

In competitions, CFA judges use a point system to compare how each cat measures up to the standard for that breed. For example, when judging the sphynx, they may award up to 35 points for traits relating to its head, up to 35 points for body traits, and up to 30 points for the quality of the cat's coat and skin.

And when judging between breeds for a "best in show" category, judges look to see which cat best represents its breed — an evaluation that partly hinges on the cat's personality, Keiger said.

"Your best cat really exceeds breed standards — it has a little something extra," she said. "It has presence, it has an aura, it says, 'Look at me; I'm a champion.'" [6 Secrets to Unlocking Your Cat's Personality]

They had one job

These pampered cats can be traced back to as early as 10,000 years ago in what is now Turkey, where their domestication journal began, scientists recently discovered. For thousands of years, domesticated cats likely resembled their striped wildcat ancestors, but different markings in their fur began to emerge during the Middle Ages, around the 13th century. And the even greater variety in coat patterns that we see in cats today arose from selective breeding that began in the 19th century, the researchers reported.

But the basic size and shape of domestic cats — even among different breeds — has remained more or less the same, certainly more so than in dog breeds, which display a much more dramatic spectrum of physical variations. This difference between modern breeds of cats and dogs can be traced to the relationships their ancestors forged with people, Keiger told Live Science.

After dogs were domesticated, people bred them so that their bodies would be better suited to perform certain jobs, she said.

As for cats, "you can't really train a cat to do anything," Keiger said. Unlike dogs, cats that lived alongside people typically had only one job: catching pests such as rats and mice. So there wasn't really much incentive for people to breed cats selectively to fill a job-related niche, the way they bred domesticated dogs, she explained.

But even among cat breeds, there are some extreme examples of artificial selection that demonstrate breeders' aesthetic preferences, such as the tailless Manx, the curly-haired Devon rex or the popular flat-faced Persian. Persian cats have been selectively bred to have a distinctly flattened face, simply because people like the way it looks, according to Keiger. The Persian flat-face profile has become even more exaggerated in recent decades — a trend that reflects the preferences of the animals' breeders, Keiger told Live Science.

"If you look at photos and drawings of Persian cats from 100 years ago, 50 years ago, even from 30 years ago, the heads have become shorter and shorter," she said. "That's been a look that's become popular."

"As judges, we influence the way cats and breeds look — if we start rewarding a particular look, breeders will start breeding toward that look. I have to think about that as a responsibility, too," Keiger added.