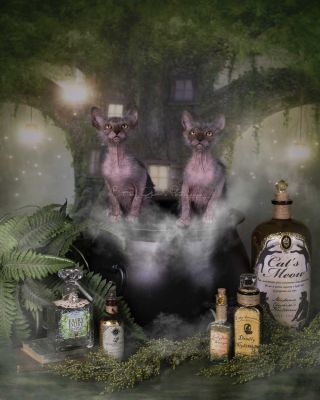 A cute and cuddly kitty cat with strange facial hair and unusual hunting habits is changing the way people think about a not-so-adorable mythological creature: the werewolf.

The Lykoi breed of domestic cat (its name comes from the Greek word lykos, or wolf) has an unusual genetic mutation that causes its hair to grow in a werewolflike way. The skin around the cat's eyes, muzzle and chin is hairless, making it resemble a human-turned-werewolf. Lykoi cats are partially hairless on their legs and paws as well, giving them a "hairy hand" appearance (the telltale sign that a person is about to shift into a werewolf), said Johnny Gobble, a veterinarian and Lykoi breeder in Tennessee.

"They do act like dogs in many [ways], though they are still cats," Gobble said. When Lykoi cats get together, he added, they behave like a pack of pups, wagging their tales as they play and taking off after prey items like a "bunch of dogs hunting something."

Gobble noted that these behaviors aren't seen in all Lykoi, and that there are other breeds of cats that also have distinctly doglike traits. But generally speaking, the wolf cat doesn't behave like your average house cat. Prone to playing all day, Lykoi prefer running after things to cuddling up on the couch for hours, he said.

Unlike its namesake, the werewolf kitty's wolfish traits aren't caused by a magic spell; rather, they're the result of a naturally occurring genetic mutation. Gobble, who was the first person to start a breeding program for these strange-looking cats, said that geneticists have yet to determine which gene is responsible for the cat's werewolflike appearance. However, genetic tests administered by the University of California, Davis proved that the cat, which shares some characteristics with the nearly hairless Sphynx cat breed, does not share the same genes as this other breed of kitty.

Breeders also have determined that the cat's unusual hair growth patterns aren't the result of any kind of disease or infection. Dermatologists and cardiologists at the University of Tennessee performed a number of tests on the animals and ruled out this possibility, Gobble said.

The genetic mutation that causes the cat's appearance is recessive, according to Gobble, who explained that, to breed the cuddly wolf kittens, he and his wife, Brittney Gobble, adopt black domestic cats from local shelters. Then, they pair these cats up with Lykoi cats.

"All of their babies will look like normal black cats, but they carry the Lykoi gene," Gobble said. "So we can take those babies, and babies from another domestic-Lykoi [litter], and breed them together, and we will get Lykoi kittens." Moreover, the offspring of two Lykoi cats will also look like cuddly werewolves, he added.

However, Gobble avoids breeding Lykoi cats with other Lykoi cats (at least for now) because doing so decreases the offspring's genetic variability, which can result in health problems for the cats. Purebred cats (and other purebred animals) often have health issues that nonpurebred animals don't have. In cats, the most prevalent problem is a weakened immune system, which is associated with more frequent illness for these pets, Gobble said.

So far, Gobble has not seen evidence that purposefully bred Lykoi are any less healthy than nonpurebred domestic cats. Gobble thinks part of the reason for this may be that the non-Lykoi cats he uses in his breeding program are rescued from shelters and may be feral cats with a very diverse gene pool. In the future, when the Lykoi's genetic mutation is more prevalent, Gobble said he hopes to just breed adult Lykoi with one another.

"We're trying to breed these cats for genetic variability and health before we focus on their looks," Gobble said, adding that he gets a lot of "hate email" from people who are concerned that he is breeding cats with a genetic mutation that is not yet fully understood.

"But I had a geneticist tell me once that if you want a gene breed to exist — in other words, if we want Lykoi to exist and not disappear — we have to breed them," Gobble said. Otherwise, the world might never know the cuteness of the werewolf kitty.