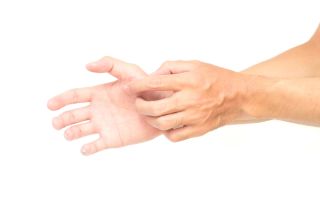 Scabies is a very contagious skin condition that's common around the world. Although the infections are uncomfortable, they usually can be treated easily.

Scabies isn't like other skin conditions. Whereas most skin problems are caused by allergies, viruses or genetics, scabies infections come from mites. A microscopic mite called the human itch mite (Sarcoptes scabiei var. hominis) burrows into the upper layer of a person's skin, where it lives and lays two to three eggs each day.

Scabies is more common in places that have limited health care and large populations, such as Central and South America, Africa, northern and central Australia, the Caribbean, India and Southeast Asia, according to the U.K. National Health Service. Nursing homes, prisons, extended-care facilities and child care facilities often can have scabies outbreaks because of the close contact of the people there.

Any contact with the human itch mites can transmit these critters. For example, they can be transmitted sexually, or they can be passed on when people share infested bedding and clothing. People can even transmit the mites when shaking or holding hands, according to the Illinois Department of Public Health.

"Transmission of scabies is usually from person to person by direct contact," said Karnika Kapoor, a primary care physician at Medical Offices of Manhattan. "Transmission from parents to children, and especially from mother to infant, is routine. In typical conditions, mites can survive off a host for 24 to 36 hours."

Though scabies has very few symptoms, it can be very uncomfortable. The prominent symptoms of scabies are itching and little red bumps or blisters on the skin (on the fingers and webbing between the fingers and areas with skin folds), Kapoor said. "Itching is often severe and usually worse at night," she said.

In infants and young children, the bumps may form around the neck, scalp, face and palms, as well as on the soles of the feet.

If a person has had scabies before, the symptoms may develop within a few days. For people who haven't had it previously, it may take as long as six weeks for symptoms to begin. However, anyone who is infected with scabies is contagious even if he or she does not have symptoms, according to the Mayo Clinic.

A subtype of scabies called crusted scabies, or Norwegian scabies, is more severe than other types because it can infect people with compromised immune systems, such as people who have AIDS or transplant patients. People with healthy immune systems are able to fight off scabies to a certain extent. Those with a compromised immune system can't fight it off as well and it evolves into crusted scabies. This type of scabies causes crusty areas on the skin that contain large amounts of mites and eggs, according to the Centers for Disease Control and Prevention (CDC).

Good timing and adequate communication are essential to the success of scabies treatment, Kapoor said. A medical professional may suspect scabies if the patient has one or more of the following symptoms:

The doctor also may examine a sample of the patient's skin under a microscope, to look for eggs or mites in the skin.

When scabies has been diagnosed, treatment is simple. Kapoor said there are two main methods for treating it. One way is to apply a cream containing an insecticide called permethrin. Patients massage it thoroughly into the skin from the neck to the soles of the feet, including areas under the fingernails and toenails, Kapoor said. The other method is to take an oral prescription medication called ivermectin, she added.

A doctor may prescribe Lindane lotion or Crotamiton (Eurax) creams instead of permethrin, or he or she may recommend antihistamines because they can help control the itching. Itching often persists for one to two weeks even after successful treatment because the mites, mite feces and mite eggs have irritated the skin and it needs time to recover.

People who live with or otherwise come into close contact with the person who is infected with scabies also must be treated. The infected person also must wash, in hot water, all of the clothes and linens that everyone in the household has used recently, in order to prevent reinfection with the mites. The mites can live for 48 to 72 hours without human contact, according to the American Academy of Dermatology.