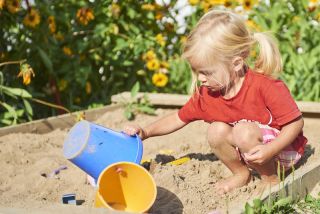 What's lurking in the playground sandbox? A new small study from Spain may confirm some of parents' worst fears: There are dangerous germs in there.

In the new study, the researchers tested sandboxes, looking for the bacterium Clostridium difficile, or "C. diff." The scientists not only detected C. diff, but also found that it was drug-resistant.

As its name implies, C. diff is difficult to treat. The bacteria cause an intestinal infection that can lead to severe diarrhea. [27 Devastating Infectious Diseases]

C. diff infections have been traditionally thought of as "hospital-acquired" infections, meaning people get them during hospital stays. But the rates of C. diff infections acquired outside of the hospital are on the rise, according to the study, published today (July 7) in the journal Zoonoses and Public Health.

The new study points to sandboxes as one possible source of C. diff infections. The bacterium may wind up there from the feces of humans and other animals, and can survive for weeks or months outside the body.

C. diff in sandboxes poses a particular threat to kids, who are considered the main group of people at risk of being exposed to germs in the environment, the researchers wrote. This isn't only because children are the ones primarily playing at playgrounds (where they can be exposed to germs), but also because kids have high rates of "geophagia" — in other words, a lot of kids eat sand and dirt.

When the researchers analyzed the C. diff samples, they found that two samples from the kids' sandboxes and six samples from the dogs' sandboxes had strains of the bacteria that were "toxigenic," meaning they produced toxins. Toxins from C. diff bacteria can damage the lining of the intestine, causing diarrhea, the Mayo Clinic says. Certain strains of C. diff produce more toxins than others.

And all the C. diff samples that the researchers found were resistant to at least two antibiotics, which could make the infection more difficult to treat.

The researchers noted that data on C. diff in sandboxes is still limited and more studies are needed to confirm the findings. However, other reports have also detected the germ in public play areas. For example, in a 2011 study, researchers found C. diff in about 7 percent of soil samples collected in public places in Zanesville, Ohio.

The new findings from Spain are a "call to action," said study co-author Dr. José Blanco, a professor of veterinary medicine at Complutense University in Madrid, in a statement. Because of the risk posed by C. diff, tests for the bacterium should be included in future environmental-risk assessments, the researchers wrote in the study.