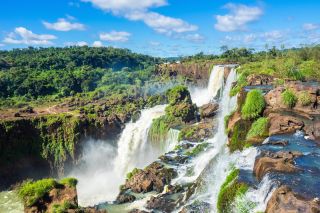 Iguazu Falls borders Argentina, Brazil and Paraguay — the happiest country in the world, according to thousands of interviews.
(Image: © R.M. Nunes/Shutterstock)

It's a tough world out there, a new report on the emotional well-being of people worldwide shows.

In the survey, pollsters asked nearly 150,000 people in 142 countries to rate their levels of emotional positivity and negativity. They found that people's reports of their positive emotions have stayed relatively constant over the past 10 years, but reports of negative emotions have slowly crept up, reaching an all-time high in 2016, according to the Gallup Global Emotions Report.

The report also revealed that the world's happiest country is Paraguay, which placed first for the second year in a row. The least happy country was Yemen. [7 Things That Will Make You Happy]

Researchers conducted the survey over the phone or by face-to-face interviews with people ages 15 or older. Syria, the least happy country in 2015, was not included this year because its ongoing civil war was a security issue, Gallup reported.

To learn about participants' positive experiences, pollsters asked people questions including whether they felt well-rested, respected and enjoyed themselves the day before. For negative experiences, they asked about feeling physical pain, worry, sadness, stress and anger the day before. Gallup used these results to formulate an index score for each country.

Happy as a clam

More than 70 percent of people worldwide reported that they smile or laugh a lot, and that they felt enjoyment, well-rested and treated with respect, Gallup reported.

Latin America and South America have many of the world's happiest countries, partly because "the cultural tendency in the region to focus on life’s positives," according to the Gallup report. Here are the world's happiest nations, with their positive experience index scores:

Historically, the countries in the Middle East and North Africa have ranked lowest on the positive-experience index; however, six countries there reported higher-than-average happiness levels in 2016, Gallup reported. Also ranking low in positivity in 2016 were the post-Soviet states. [11 Tips to Lower Stress]

Iraq had the highest negativity index score, with 58 points. This is the fifth time in recent years that Iraq has topped the list.

Greece was the most stressed-out country, with 67 percent of Greek participants saying they felt stressed the day before. This may be because of high unemployment rates there, Gallup said.

Kyrgyzstan had the lowest (and therefore the least negativity), with a score of 12. The United States ranked 57th with a score of 32, tying with the Dominican Republic, Argentina, Macedonia and South Africa, Gallup reported.

The countries with the highest negative experiences include:

Overall, Ecuador, El Salvador and Liberia were the most emotional countries in 2016, with almost six out of 10 residents in these countries saying they felt either positive or negative emotions the day before. Countries with ties to Russia and the former Soviet Union were the least emotional, with just four out of 10 residents experiencing any of the feelings the pollsters asked about in the survey.