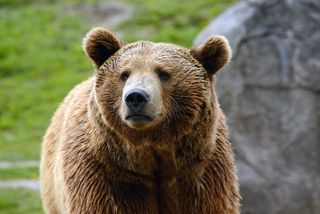 Grizzly bear populations are on the rebound in Yellowstone.
(Image: © Georgia Evans/Shutterstock)

The decision to return the Yellowstone bears to state and tribal management reflected rebounding grizzly numbers in the Greater Yellowstone Ecosystem (GYE), a region that encompasses Wyoming, Idaho and Montana, U.S. Secretary of the Interior Ryan Zinke said in a statement.

However, scientists and Tribal Nations representatives have argued against the delisting, citing that the bears aren't out of the woods just yet, according to a statement published online by the Sierra Club, a nonprofit environmental organization. [Species Success Stories: 10 Animals Back from the Brink]

About 700 bears currently inhabit the GYE — up from 136 individuals in 1975 — and their range covers 2,500 square miles (6,475 square kilometers). The U.S. Fish and Wildlife Service (USFWS) found the population to be stable and sustainable, determining that the bears had reached a recovery point that no longer required federal protections, representing "one of America's great conservation success stories," Zinke said.

Grizzly bears "have long warranted delisting," as they have met or exceeded recovery objectives since 2003, Wyoming governor Matt Mead said in a statement published online by the governor's office.

Grizzly bears were listed as endangered in 1975. They were delisted in 2007, but protections were reinstated by a federal judge in 2009, stating that the USFWS had overlooked the decline of an important food source for the bears, and Mead requested removing grizzly bears' endangered status again in 2013.

But many remain skeptical about the bears' prospects, despite USFWS assurances. Some experts say that the grizzlies' recovery is still a work in progress, and without federal oversight, the progress that the bears have enjoyed in recent years could quickly be reversed, according to Michael Brune, executive director of the Sierra Club.

"Without necessary endangered species protections, the survival of grizzly bears in Greater Yellowstone is put in jeopardy," Brune said in the Sierra statement.

The Yellowstone bears' delisting follows another recent legislative decision that abolished other types of protections for bears in Alaska.

On March 21, the U.S. Senate voted to overturn hunting regulations in Alaska refuges that banned aerial hunting, trapping and baiting of grizzlies and other wildlife. Supporters of that resolution claimed that relaxing hunting restrictions against large predators would benefit other types of declining wildlife, but there is no evidence to support such a claim, Sierra Club representatives said in the statement.

"People and bears can coexist — and as grizzly recovery so far has demonstrated, can do so in a way that is highly beneficial to all," Brune said. "However, coexistence cannot work if misplaced political hostility continues to impede the ability of sound science to keep bears from sliding back towards extinction."